The Crossing Clarendon is buzzing with activity.

The mixed-use shopping and residential center formerly known as Market Common Clarendon is now home to tens of thousands of honeybees.

“We’ve been busy bees at The Crossing Clarendon!” the center said in a Facebook post. “In partnership with Alvéole, we’re so excited to announce our newest tenants… a honeybee hive.”

The hives are located on the rooftop of The Cheesecake Factory, and were installed by Alvéole urban beekeepers on Oct. 15.

There are two hives with a total of 24,000 bees. Alvéole has a special webpage where curious Arlingtonians can keep up with the bees.

“These vegan honeybees are helping change perspectives of our urban environment and reconnecting our community to the wonders of nature,” The Clarendon Crossing said.

Alvéole is an urban beekeeping company that helps businesses, schools and organizations install honey bee hives on their rooftops and increase engagement and sustainability. It installs hives in cities in the U.S., Canada and Europe.

Over the past 15 years honeybee colonies in the U.S. have seen large annual declines due to disease, pesticide use and habitat loss, and something called colony collapse disorder. The U.S. Dept. of Agriculture, however, said recently that the average number of honeybee colonies actually increased over the past decade, after reaching a low point in 2008.

Urban beekeeping efforts like this one in Clarendon are intended to help.

“Our goal is to make people fall in love with bees, build ecological awareness, and in time, more sustainable cities and food systems,” says the Alvéole website.

“If you talk to anyone involved in this space, [they’ll tell you] the need for young minds and younger people getting involved is dire,” Garmon said.

Committed to backing up that buzz, Garmon is hosting a class early next month to introduce students around the 5th grade age range to bees and beekeeping. The class is part of Arlington Public Schools’ Youth Enrichment Program, a new set of classes offered for local students in late-elementary school and middle school to gain new experiences.

“The Youth Enrichment Program course is not so much a technical course on managing the hives, it’s about understanding the importance of bees and getting people to realize that we have a responsibility to be good environmental stewards and the importance honeybees have,” Garmon said.

Raul Matos, coordinator for APS’ Arlington Community Learning program, said the Youth Enrichment Program started this past September. Matos said many of the programs, like the Help the Honeybees class, are aimed at children who’d rather be in a classroom for their out-of-school enrichment activities.

“It got started because we discovered that not all children, when it comes to enrichment, want to be outside playing soccer or being in the pool,” Matos said. “Some want to be in the classroom, in classes like Japanese and video film editing.” 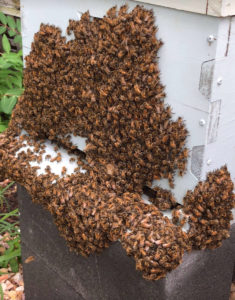 “There’s a lot of misinformation around honeybees, like when people say ‘my kid was playing baseball and got stung by one,'” Garmon said. “So we look at honey bees vs. wasps and yellowjackets. That way when kids are walking around their yard and see a honey bee on a flower, they’ll know it’s not an aggressive insect. It gets them to go back out to their kids and their parents and teach them what they learn.”

Beyond just an elementary apiary education, Garmon said there’s life lessons for kids to learn from the hive. One honey bee only makes one-twelfth of a teaspoon of honey, and Garmon said there are a lot of kids can learn about the power of collaboration through that.

“There’s a lot of biomimicry,” Garmon said. “These insects only live a couple weeks, but what they live their entire life doing is serving to benefit their community. You can parallel that to these kids, who may feel small and insignificant. They get little straws and run around ‘pollinating flowers.’ Bring some of that nectar back to the hive. Even though these are small droplets of water, the end result is much bigger than themselves.”

Garmon said he hosted an initial class when the Youth Enrichment Program started in the fall and it filled up quickly. There’s only a few slots open left in the March session, but Garmon said he hopes to host another one in May.

Other classes being offered over the next few months include an animation class and a guide to making fascinators. Matos said he’s particularly excited about the math strengthening classes, but those are currently full. This summer, Matos said the Youth Enrichment Program plans to offer STEM-related classes like “Programming through Minecraft” and “Building Fortnite Games.”

0 Comments
News
Brad Garmon is hoping to bring his bee business to Arlington
Raw pollen Brad Garmon collected from the bees is sticky sweet with a pleasant, chalky feel
Beekeepers use smoke to calm bees while opening up the hives
Bees can pollinate plants miles away from their hives, helping fruits, vegetables, and flowers
Garmon’s Italian honey bees seal their hives with a sticky resin that requires tools to crack through
Brad hopes to relocate all 25 of his hives to Arlington within the next year
Brad Garmon’s five backyard hives yielded 100 pounds of honey last year
Brad Garmon says honey yields from urban bees is greater, and the bees live longer, because urban areas have more diverse crops and fewer pesticides than rural ones
Gardens are dotted throughout Arlington, including at the Central Library where vegetables are grown for AFAC’s food bank
AFAC is experimenting using the compost in its organic garden on S. Walter Reed Drive which grows several types of vegetables
Vegetables are donated from gardens straight to AFAC
Previous Image 1/11 Next Image

An urban farming movement growing across the country already is “booming” here in Arlington, supporters say.

“There is absolutely a boom,” said Rebecca Carpenter, founder of Arlington startup Sprout which installs backyard gardens and trains people in how to grow their own produce. “I feel like it is everywhere across the country but I feel it more so in Arlington because folks here are pretty health conscious, progressive.”

Crops can be grown in urban environments in several ways, including rooftop gardens, vertical farms, and green walls. In Arlington, officials say community gardens are one of the most popular methods.

There are 379 Arlington residents who grow fruits, vegetables, or flowers in community gardens, and another 628 on waiting lists, according to Urban Agriculture Coordinator Kim Haun of the county’s parks department. That’s after the county added space for 150 more gardeners over the last three years.

“More and more people are realizing the benefits of urban farming,” said Haun. “It creates a sense of belonging, just check out a community garden on a weekend, the gardeners are family.”

Officials told ARLnow that a combination of demographics and development opportunity make the county fertile soil — so to speak — for community gardens, and green roofs. And beekeeper Brad Garmon said these same resources made the county an ideal home for bee businesses. Either way, everyone who spoke with ARLnow reported increases in the number of people seeking agricultural training and resources.

“I would say it’s definitely been an increased interest. We’ve witnessed our membership levels increase substantially over the past year,” said Matt McKinstry, a board member of the Arlington-based Friends of Urban Agriculture (FOUA.) He said 100 new people joined the organization last year, bringing membership totals to around 500.

“Millennials, the 20 and 30 somethings, are becoming aware of food production and the effects of industrialized agriculture,” said McKinstry. “And they’re curious to understand where their food comes from and how they can both support their local economy and as well as find healthier food options.”

According to program leader Kirsten Conrad, there are 230 people in Arlington certified with the Virginia Cooperative Extension Master Gardener Program — up from the usual cohort of about 200 people.

“I think there’s a much better understanding of the value of the native plants and supporting our birds and insects,” said Conrad of the changes in recent years.

Community gardens in Arlington have blossomed over the past decade: from the Glebe Community Garden, which is assessable for gardeners with disabilities, to the Walter Reed Garden, which is tended by senior citizens and teenagers, to the Reevesland Learning Garden, which teaches Ashlawn Elementary students about growing lettuce.

Haun with DPR said there is no data on the number of private homeowners or businesses who have their own plots, but the county is aware of 57 private plots throughout Arlington that people use to farm crops for the Arlington Food Assistance Center, which collected almost 100,000 pounds worth of locally grown fresh produce for its food bank.

Carpenter says people are also growing produce in their backyard — and increasingly, in their front yard too.

“If you do want to grow edibles you do have to get strategic about where you want to plant them,” she said. “And the front lawn is usually the best place to do that.”

This is because front lawns typically have more sun, are flat, and have easy access to a hose. Still some challenges remain: mature trees can make some yards too shady to grow crops, and hungry deer can cause conflicts.

While growing plants in one’s yard is perfectly permissible, a movement earlier this decade to spur the growth of another form of urban agriculture in Arlington came up short: proposals to allow backyard hen raising in more Arlington yards were largely shot down.

The backyard hen issue was taken up by an Urban Agriculture Task Force, led by John Vihstadt before he was elected to the County Board, and which later formed FOUA. Despite the hen proposal stalling, some of the task force’s short-term recommendations, presented to the Board in 2013, have since been implemented, including:

One company looking to take advantage of all the buzz around native plants and insects is Charlottesville-based Commonwealth Bee Co.

END_OF_DOCUMENT_TOKEN_TO_BE_REPLACED

Demolition has begun in preparation for the Nauck Town Center project, and the neighbors might not be the only ones buzzing with interest.

The building torn down last week is none other than the former home of about 70,000 honey bees, which the county relocated in July 2017 after realizing they had not only purchased a former office building but an apiary abode as well.

The aging building had only been vacant for about four months, according to the county, but about 100 pounds of honey were already generated by the time that local beekeepers swooped in to relocate move the hive.

The demolition is one of the final steps in the project’s first pre-construction phase. Utility undergrounding and site perimeter streetscaping will start fall 2018 and end spring 2019.

The second phase of Nauck Town Square project construction is scheduled to begin in the spring or summer of 2019 and wrap up by the winter of 2020. Pre-construction for phase two will begin spring 2018 and last through winter 2019.

The Nauck Town Center project, which has been years in the making, includes an open plaza, outdoor stage, public art, tables and seating and sidewalk improvements, along with displays about the history of the community, which was settled by free African-Americans in 1844. The design includes a large sculpture of the word “FREED.”