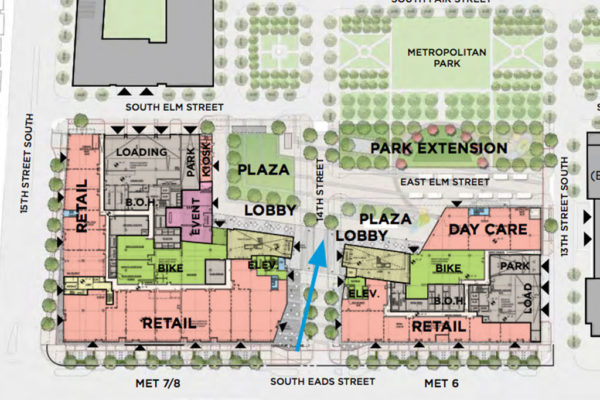 As Amazon continues to hire for its HQ2, the company is also working through plans to include a new daycare facility inside its planned permanent office campus in Pentagon City.

The 12,000 square-foot child care center would be located on the ground floor and face the interior public plaza. A spokesperson for Amazon told ARLnow that the proposed daycare would be operated by a third party company.

Lack of accessible daycare is the center of a fight in Seattle, where a group called “Momazonians” are arguing the company needs to do more to provide accessible child care, though a spokesperson the Amazon noted that the company does have a daycare facility for both Amazon employees and the nearby community in one of their headquarters buildings.

In Arlington, the company is in a tug-of-war with planners over whether the daycare should count towards the headquarters’ total density. The daycare is one of several types of space that the company is requesting not be included in calculations of gross floor area. Because the proposed complex exceeds the allowable density under zoning for the site, excluding certain types of space from the floor area calculation would cut down on the community benefits Amazon would need to provide in exchange for the added density.

Many of these areas, like mechanical shafts and below-grade storage, are excluded by default as they do not contribute to the bulk and height of the building and are not rentable floor space. But child care facilities typically are not considered one of those excluded types of density.

“Staff has not supported exclusions from density for uses such as child care,” the staff report said. “Staff is currently analyzing the applicant’s requests.”

At a meeting last week, the proposed exclusion of the child care facility from the building’s bonus density drew some criticism from Site Plan Review Committee members, who pointed to the example of the formerly Ballston-based National Science Foundation, which they said was granted a density exclusion for a child development center only to later convert the space to another use.

But Arlington has been in the middle of a push to create more daycare options, including consideration of zoning changes aimed at eliminating barriers to child care.

The spokesperson for Amazon said the company is planning to include the daycare at HQ2 regardless of whether the county approves the density exemption.

Next
Ask Eli: Are Appraisal Values Keeping Up With Sale Prices?