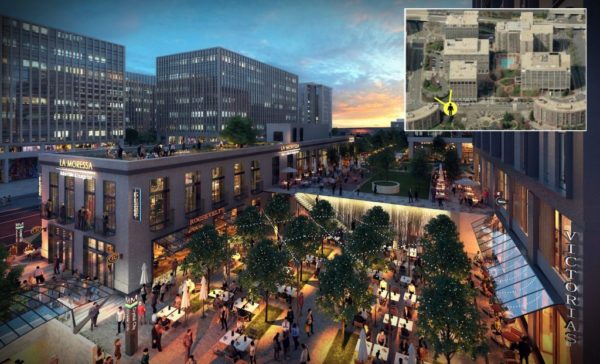 Developer JBG Smith may be planning to let people sip alcohol as they browse shops and sit outdoors in shopping areas near Amazon’s future headquarters in Pentagon City and Crystal City.

State records with the Virginia Alcohol Beverage Authority Control Authority indicate that the developer applied for a “Commercial Lifestyle Center” license this week. The special license is part of a 2018 law allowing shoppers to bring alcoholic beverages into shops or outdoor plazas to encourage consumers to stay longer and attend outdoor events.

Under the new law, shopping centers can apply for a license provided they have at least 100,000 square feet of retail space and demonstrate they can police the area, as reported by the Washington Business Journal. The law also requires the application come from an association of businesses in a shopping area, not a single business on its own.

A spokeswoman for the developer declined to comment when reached yesterday (Tuesday.)

The Association was formed in June by an attorney from the Arlington-based law firm Walsh, Colucci, Lubeley & Walsh, which represents JBG Smith on several projects, including the two towers they’re building at Amazon’s Metropolitan Park headquarters.

One place in the Crystal City, Pentagon City and Potomac Yard area — dubbed “National Landing” — at which the developer could use the license would be its Crystal Square project. The project aims to redevelop the block of Crystal Drive into a “retail hub” between 15th Street S. and 18th Street S.

JBG Smith has called for adding new retailers like an Alamo Drafthouse movie theater, a grocery store, and an outdoor dining area to the block near the Crystal City Metro station.