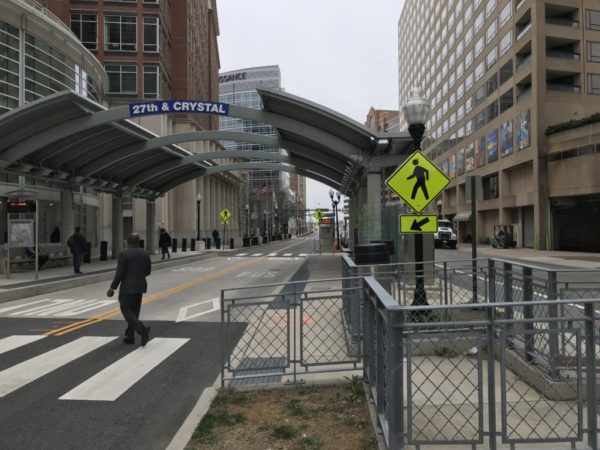 A pair of roads on the southern end of Crystal City opened to two-way traffic earlier today.

The new traffic pattern comes after several months of construction to facilitate the change. It’s the third phase in a multi-year process of opening former one-way streets in Crystal City to two-way traffic, through construction and and roadway restriping.

The first phase of the project will add a southbound lane to the portion of Crystal Drive between 12th Street and 15th Street, just north of the Crystal City water park. It will also convert a one-way section of S. Clark Street between 12th and 15th Streets to a two-way road. Construction on this phase of the project is expected to begin in the spring of 2012 and wrap up in winter 2012.

A second phase is expected to begin construction in fall 2012. That phase will add a southbound lane to the one-way portion of Crystal Drive between 23rd Street and 27th Street. Changes will also be made to 27th Street, which runs between the Courtyard by Marriott and the Hyatt Regency hotels.

“The Crystal Drive Two-Way Conversion project will begin to establish the street network needed to support future development and transit improvements planned by the Crystal City Sector Plan and Crystal City Multimodal Study,” Arlington County said on the project website. “The intent of the project is to improve the navigability of Crystal City by converting Crystal Drive and the surrounding street network from a one-way to a two-way directional roadway.”

The vision of “future development and transit improvements planned by the Crystal City Sector Plan” mentioned in 2011 seems to be coming to fruition, with a new slate of major redevelopment projects announced this week; the removal of Route 1 overpasses being discussed; and the Crystal City-Potomac Yard Transitway expected to expand to Pentagon City in the near future.

This section of Crystal Drive will have one travel lane in each direction. 27th Street will have two eastbound lanes to access Crystal Drive and Potomac Avenue, and one westbound lane providing direct access to the Hyatt and Route 1.

Police and the County’s construction team will be on-site throughout Friday to monitor the switch and help direct traffic. If possible, avoid this area during the changeover on mid-day Friday, and be prepared for the new traffic pattern when using these streets in the future.

Reminder: Later this morning stretches of two Crystal City roadways will permanently switch from one-way traffic to traffic in both directions. Not that there's anything wrong with that. https://t.co/i09rW4BPuf pic.twitter.com/E2IoVifolA