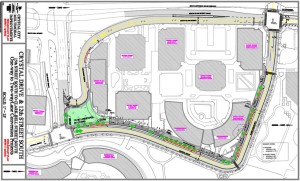 Starting next year, two one-way portions of Crystal Drive are set to be converted to two-way roads — a move that planners hope will prepare the Crystal City area for future development and a proposed transitway.

The first phase of the project will add a southbound lane to the portion of Crystal Drive between 12th Street and 15th Street, just north of the Crystal City water park. It will also convert a one-way section of S. Clark Street between 12th and 15th Streets to a two-way road. Construction on this phase of the project is expected to begin in the spring of 2012 and wrap up in winter 2012.

A second phase is expected to begin construction in fall 2012. That phase will add a southbound lane to the one-way portion of Crystal Drive between 23rd Street and 27th Street. Changes will also be make to 27th Street, which runs between the Courtyard by Marriott and the Hyatt Regency hotels.

“The Crystal Drive Two-Way Conversion project will begin to establish the street network needed to support future development and transit improvements planned by the Crystal City Sector Plan and Crystal City Multimodal Study,” Arlington County said on the project website. “The intent of the project is to improve the navigability of Crystal City by converting Crystal Drive and the surrounding street network from a one-way to a two-way directional roadway.”

Drivers can expect lane closures during the construction project.