Earlier this year, the Washington Post’s John Kelly shot down Rosslyn’s attempt to brand itself “Manhattan on the Potomac.” You won’t find the word “Manhattan” anywhere in the 156-page Crystal City Sector Plan, but it certainly comes to mind when one sees an artist’s rendering of tall buildings and wide sidewalks surrounding the renamed “Jefferson Davis Boulevard.”

A thriving “see and be seen” street life and a dedicated cultural district are among the goals of planners who hope to convert Crystal City from the workaday home of monolithic government office buildings to an urban oasis of gleaming trophy office towers, shiny new apartment buildings and busy retail corridors.

To achieve the vision of a pedestrian-oriented urban community, however, major investments will need to be made in Crystal City’s inadequate transportation infrastructure — specifically, the roads. 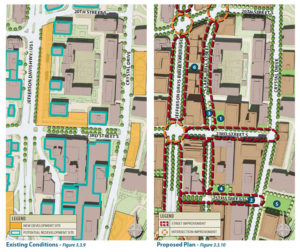 Currently, Crystal City is surrounded by Crystal Drive on one side, Jefferson Davis Highway on the other, and a disorganized jumble of parallel streets in between. It’s unclear who decided that Clark and Bell Streets should be separate, discontiguous traffic traps, virtually devoid of easily cross-able intersections, but it was obviously someone who, at the time, considered the Crystal City Underground to be the end-all be-all of pedestrian-friendliness.

The sector plan calls for the streets to be combined and “realigned” into a singe, tree-lined “Clark-Bell Street” that will traverse Crystal City top to bottom. Achieving such a realignment will be one of the plan’s biggest challenges. Entire buildings will need to be acquired and torn down to make it happen.

Jefferson Davis Highway, meanwhile, will be utterly transformed into an urban boulevard and will be appropriately renamed “Jefferson Davis Boulevard.” Traffic will be “calmed,” pedestrian crossings will be made safer and, if all goes as planned, the thoroughfare’s current capacity will be maintained.

One longer-term goal is to replace the ramp from Jefferson Davis Highway to the airport with an at-grade traffic circle to be named “National Circle.” Jefferson Davis Boulevard will pass under the circle, allowing traffic to flow uninterrupted.

Public hearings on the Crystal City Sector Plan are scheduled for September 13 and 25.

In the latest video from our walking tour of Crystal City, County Board Vice-Chairman Chris Zimmerman and Crystal City Business Improvement District President Angela Fox explain the thinking behind the realignment of Clark and Bell Streets.

END_OF_DOCUMENT_TOKEN_TO_BE_REPLACED

More Stories
In a Moment, A Life Taken and Many More ShakenBREAKING NEWS — Worker Falls To His Death At Courthouse Hotel