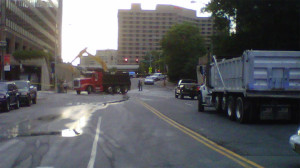 Over the weekend, an ugly and outmoded pedestrian bridge over 18th Street in Crystal City was torn down with little fanfare or community objection. The bridge’s fate is symbolic of the changes that will be taking place in Crystal City over the next 40 years.

Tonight the County Board is expected to advertise public hearings on the blandly-named but far-reaching Crystal City Sector Plan 2050.

The plan sets a vision of the new Crystal City that will emerge once dozens of federal agencies and thousands of federal jobs move out as a result of the Base Realignment and Closing Act.

Among the expected changes:

Another challenge — getting approval from the FAA for constructing new, taller buildings — has been partially accomplished. An FAA feasibility study has green-lit the first phases of the project, pending periodic reviews to see if building heights could interfere with aircraft and ground radar at Reagan National Airport.

We took a walking tour around Crystal City with County Board Vice-Chairman Chris Zimmerman and Crystal City Business Improvement District President Angela Fox to get an idea of what the new Crystal City will look like. Below we highlight the intersection of Crystal Drive and 18th Street. This is the first in a series of videos.