(Updated at 4 p.m.) More detailed plans for part of JBG Smith’s massive new round of redevelopment near Amazon’s new headquarters are coming into view.

A preliminary site plan filing reviewed by ARLnow includes a 688,223 square-foot residential development in Crystal City — a pair of towers at 2000 and 2001 S. Bell Street — replacing an existing building at 2001 Richmond Highway and an adjacent parking lot.

That’s in addition to four other new, planned buildings — at 223 23rd Street S., 2300 Crystal Drive, and two towers at 2525 Crystal Drive — that were announced late Tuesday afternoon. In all, JBG Smith announced five new residential buildings and one office building — “all within a half mile of the Metro and Amazon’s new headquarters.”

The two S. Bell Street towers will be located across the street from one another on a new, re-aligned portion of Clark-Bell Street, bounded by 20th Street to the north and the newly renamed Richmond Highway to the west. The proposed buildings include a combined 762 housing units and 54,215 square feet of retail space.

Attorney Kedrick Whitmore of Venable LLC submitted JBG Smith’s site plans. In a letter, Whitmore wrote that the new development will bring an “infusion of new residents and mixed uses” that will “activate the existing fabric of Crystal City.”

Whitmore also noted new residents will create a stronger market for the retail spaces, which are struggling countywide to attract tenants. 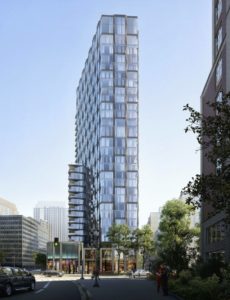 Together the buildings will be served by a two-story underground parking garage with 314 spaces for cars.

JBG Smith’s attorney noted that the developer would be demolishing 185 existing parking spaces on the lot and adding 444 for an overall increase of 259 spaces — and resulting in a final parking ratio for cars of 0.34. The garage is also slated to include 330 bicycle parking spaces.

Coming between the two towers would be a new, merged S. Clark and S. Bell street, which is part of the Crystal City Sector Plan’s goal “to form a new north-south street between Jefferson Davis Boulevard and Crystal Drive.”

Arlington began demolishing the the S. Clark Street bridge over 18th Street S. in June as part of a larger $6 million project to bring Clark Street down to ground level and re-align the two streets together.

JBG Smith is proposing a new pedestrian walkway to the new street which wraps around the east tower.

The developer also submitted plans for an additional pair of buildings on the northwest corner of 23rd Street S. and Crystal Drive.

JBG Smith’s attorney wrote that the plan for the buildings will “include significant site improvements, including (but not limited to) partial implementation of realigned Clark-Bell Street, improved onsite circulation, street and sidewalk improvements along segments of 23rd Street and Crystal Drive, new interim public open space, and new infrastructure.”

Whitmore noted that the developments align with the Sector Plan‘s overall goals of transforming the area into an an “18-hour” neighborhood where people can work, live, and go out.

Also included in the new development plan are two towers at a listed address of 2525 Crystal Drive, which seemingly corresponds to the location of the JBG Smith-owned Crystal City sand volleyball courts and workout park, next to an off-ramp from Reagan National Airport.

Additional details on the new developments, however, including renderings and maps, were not immediately available due to confusion at the permit office caused by the county’s new digital permit submission system.

According to two permit staffers, JBG Smith did not correctly submit the site plans to the online system, resulting in the need for re-submission this (Wednesday) afternoon. Renderings of the new buildings and landscaping maps were also not publicly available by Tuesday afternoon.

JBG Smith’s latest slew of projects are in addition to its other plans in Crystal City and Pentagon City — which include redoing an office building (1770 Crystal Drive), adding new apartments to the Riverhouse complex, and building twin apartment towers at 1900 Crystal Drive.