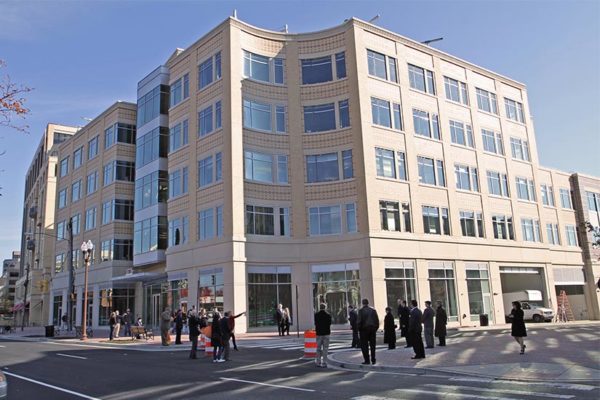 Owners of mixed-use buildings in Arlington are struggling to find tenants for ground floor retail space, and instead have been seeking permission to fill the space with other uses.

The Arlington County Board will consider three such requests — from office buildings in Rosslyn and Ballston and Le Meridien Hotel in Rosslyn — at its meeting on Saturday.

“It is definitely a trend,” said Michael Smith, director of real estate at Bethesda-based retail strategy firm Streetsense. “We are at a point in time where we have a lot of retail space and a decreasing number of prospective tenants to fill those spaces.”

The owner of the Ballston Pointe building at 4300 Wilson Blvd (which once housed Ted’s Montana) is asking permission to convert its 2,132 square-foot ground floor space into a gym for residents and office space.

Likewise, Le Meridien seeks to convert its 900 square-foot retail space into offices, and the 1776 Wilson Blvd building in Rosslyn (home of Quinn’s and formerly of Kona) wants to cast a wider net for “retail equivalent” tenants like education organizations to fill its 22,829 square feet of unused retail space.

County staff wrote in a report to the Board that the Meridien vacancy is “due to a combination of design and location factors the site has not been a successful retail space” and in another report, that 1776 Wilson “cited difficulty retaining leases with tenants that meet the definition of retail.”

“Municipalities are trying to encourage ground floor retail environments to create sense of place, but the reality of it is that there is only so much of it going around,” said Streetsense’s Smith.

He cited millennials’ penchant for prioritizing experiences over things as one reason retail has been declining over the last decade — leaving fewer prospective tenants. Another problem with filling ground-floor retail space is that not all spaces nor streets are ideal areas to attract shoppers.

That contrasts with an aggressive, former Arlington County policy dubbed “retail everywhere,” which was replaced in 2015 with a more “curated” approach.

Restaurateurs have long bemoaned certain portions of the county, like the western side of Glebe Road in Ballston, as places businesses struggle. The old adage of “location, location, location” applies in Arlington, but sometimes it’s hard for businesses to figure out what will work in which places.

Smith said buildings in Arlington’s neighborhoods like Rosslyn, which is hillier and sleepier at night compared to places like Clarendon, typically have a harder time finding and keeping retailers. However, he noted the Rosslyn Business Improvement District’s community events and artwork are steps toward making the area more attractive to people and businesses.

“While we would all want our streets lined with beautiful boutiques or cafes, that’s just not the reality,” he said.

The County Board has issued approvals for retail space to be turned into alternatives like medical offices for years. Members have also OKed converting office space back to retail space, though that process is sometimes fraught.

An auction by East Falls Church bookstore One More Page recently generated discussion on whether the county also had an obligation to help ground floor retailers weather rising rents.

Smith said that government-led programs or economic incentives only make sense “if the numbers pan out and its win-win for everyone.”

“The best thing you can do is turn the faucet off, and put retail where it belongs,” he said.