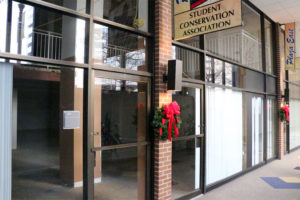 Four vacant retail spaces — three in Rosslyn and one in Courthouse — could be converted into medical or office space following action by the Arlington County Board this weekend.

The Board has four items in Saturday’s consent agenda dealing with the conversion of space mandated to be retail, based on building’s site plans, to office or medical uses. One of those items is for a dentist’s office already in operation in Courthouse Plaza under a temporary site plan amendment.

The other three agenda items are for:

County staff identified no issues for any of these sites, suggesting a “medical/physical therapy office, will help activate the street and pose no adverse impacts to the neighborhood,” in all of the reports.

The county seems to be taking a softer line on mandated ground floor retail spaces, in recognition that some storefronts are just not viable for traditional retail. For instance, 1800 N. Kent Street is well hidden from Rosslyn’s main N. Lynn Street drag, resulting in a relative paucity of the foot traffic that could bring customers to a small business.

County staff, in recommending approval of the motions, used the draft Arlington Retail Action Plan as guidance in its decisions.

The draft action plan, which would replace and expand upon the 2001 Rosslyn-Ballston Corridor Retail Plan, includes a map that specifies which type of retail can go where. According to the county’s planning staff, all four locations on Saturday’s agenda are considered appropriate for medical or office use under the draft retail map.