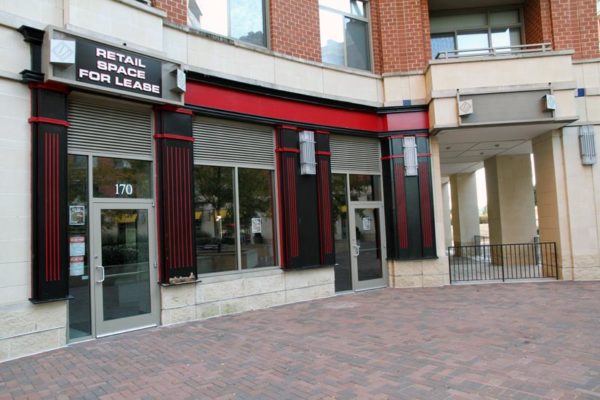 For years, businesses have come and gone from the retail space on the ground floor of the Eclipse condo building in Potomac Yard. Now relief may be on the way.

The Arlington County Board is set to vote this weekend on a site plan amendment that will allow the landlord of the 3600 and 3650 S. Glebe Road buildings to lease the retail space to “retail equivalent” businesses, defined as:

Uses that have characteristics similar to retail such as the hours of operation, the customer base and the level of activity that provide visual interest and create an active street life, but are not retail uses. Uses include but are not limited to museums, galleries, day care uses, medical and dental offices, colleges and universities and hotel lobbies; as well as certain innovative office elements and residential amenities such as fitness centers, community rooms, etc.

The tiny shopping plaza is located in a roundabout between the two buildings, well off the beaten path — north of the busy Potomac Yard Shopping Center in Alexandria but south of Crystal City. To the west, across Route 1, is Arlington’s sewage plant.

A procession of sit-down restaurants has tried and failed to open and attract customers. One even had to put out a press release after they learned that Google Maps was steering would-be customers to an empty plot of land several blocks away. And that’s not to mention the extended closure of the adjacent Harris Teeter store, the block’s biggest draw, following a major sewage backup in 2012.

“The applicant has experienced sustained difficulty in attracting and retaining retail tenants for certain base retail spaces since 2006, when its Retail Attraction and Marketing Plan (RAMP) was approved,” the staff report for the site plan amendment notes.

“This space, along with others, are located on an interior circle drive, off South Glebe Road, and the applicant sites the lack of visibility as an obstacle for retaining retail tenants,” the report adds. “Recently, a physical therapy practice sought to lease a retail space, but could not be certified for occupancy because it is an office use, rather than retail use.”

Currently, the circle is home to a small collection of restaurants and service businesses. Should the County Board approve the change, it may be able to attract other businesses more equipped to survive in the low foot traffic area. No changes are proposed for the Harris Teeter space, the staff report notes.