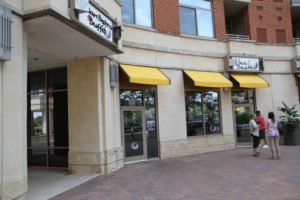 Hee Been Asian Bistro Buffet (3600 S. Glebe Road) has closed after less than 7 months in business.

The family-owned restaurant opened on the ground floor of the Eclipse condominium building, near Potomac Yard, on Christmas Day 2011. No word on why the restaurant closed, but a tipster tells us it didn’t seem to be attracting enough customers. Hee Been was closed yesterday, according to another business owner at the Eclipse, and a property manager was seen changing the locks today.

Hee Been’s original Alexandria location, at 6231 Little River Turnpike, is still open, according to an employee who answered the phone there this afternoon.

When it opened, Hee Been featured an 80-foot-long dinner buffet with some 85 different items representing three different types of cuisine: Korean, Japanese and Thai. The restaurant was an ambitious undertaking for the development, at the far southeast corner of Arlington. Though the Eclipse and the nearby Camden Potomac Yard apartment complex both have residential tenants, the large National Gateway office complex, across the street from the Eclipse, is still awaiting an office tenant.

This is the latest in a string of bad news for the area. In May the Harris Teeter grocery store at the Eclipse closed due to flooding caused by a sewage backup. It has remained closed since. An Irish bar, McGinty’s Public House, closed late in 2010.