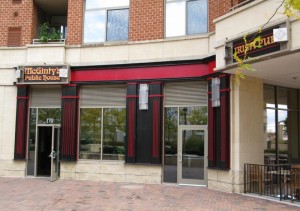 A new bar/restaurant is coming to the Market Square at Potomac Yard development (3650 S. Glebe Road) near Crystal City.

“Melody Tavern” will serve healthy, modern American fare and will host live music and comedy acts, according to owner Michel Daley. It will target the more mature “professional set,” he said.

Daley, formerly the co-owner of D.C. waterfront hotspot Zanzibar, says the restaurant will be opening in the large, 7,000 square foot space once occupied by the now-shuttered McGinty’s Pub. He anticipates a September or October opening date.

The restaurant will have fewer flat screen TVs than McGinty’s, Daley said, but will still show sports and other programming during times when no live entertainment is booked. There will be a weekly, live jazz brunch on Sundays as well as occasional live jazz and blues performance at night.

Daley said he’s confident Melody Tavern will be a “destination” that will attract customers to the relatively new retail square, which he admitted is somewhat “off the beaten path.” He said two other new restaurants in the square — the Asian fusion eatery Heebeen and pizza-and-pasta joint Paisano’s — will be opening soon and will also help to add vitality to the area.

“I couldn’t be happier,” Daley said. “I couldn’t have found a better spot.”

At first, the restaurant will only be open at night on weekdays. It will eventually open for lunch during the week when tenants start moving into a new office building across the street, Daley said. Like McGinty’s, Melody Tavern is expected to seat more than 150 people inside the restaurant and outside on its 1,000 square foot outdoor patio.