Arlington’s Mobility Lab released a recent report on the county’s e-scooter and e-bike pilot program, providing an extra boost to arguments for allowing the devices permanently.

The Arlington County Board voted in June to extend the end date of the pilot program through December, prior to which the Board will need to make another decision on the future of so-called “shared mobility devices.”

The 102–page report says that scooters and e-bikes are a “viable complement to the County’s transportation ecosystem that increases mobility options and provides potential sustainability benefits.” However, it also lists eight recommendations to improve the program, including making sure scooters and e-bikes are more evenly deployed in upper as well as lower income areas.

The authors of the report noted that mapping neighborhood income levels over trip origin locations indicate that many people started scooter trips while in neighborhoods with incomes below the Arlington County’s median household income, “suggesting that [scooters and e-bikes] could be appealing to lower-income residents and promoting equity.” 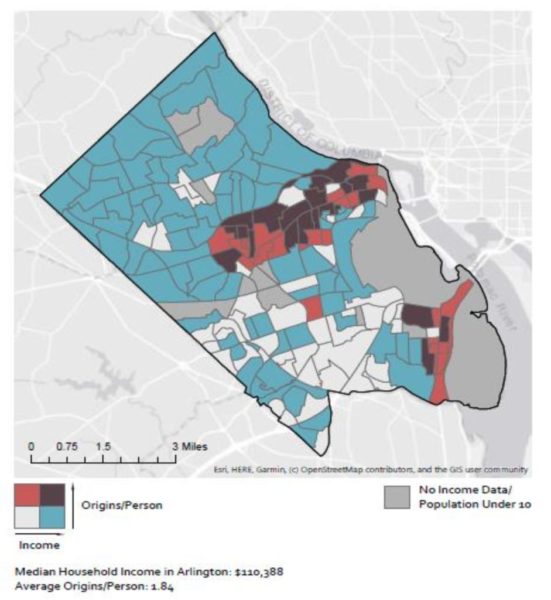 Other improvement recommendations in the report included:

“But we’ve also learned that people are just not comfortable scooting on sidewalks or even our current non-protected bike lanes,” she said. “We want to leave sidewalks to people on two feet and those who are slow rolling.”

The county’s Pedestrian Advisory Committee (PAC) wrote a letter in September saying they were “generally supportive” of continuing the program, but remained “concerned about the impact these devices have on the pedestrian environment when they are ridden or parked on the clear zone of the sidewalk.”

The PAC wrote that more bike lanes would remove pedestrian-scooter conflicts, but other measures like barring e-bikes from some trails and capping the hours they can ridden (as one D.C. Councilmember attempted) are “unnecessary.”

The Arlington County Board is due to discuss the future of the pilot program at the end of December.

In April, a staff presentation to the County Board indicated riders tooks 313,166 trips on scooters since the program began with an unsanctioned deployment of Bird scooters last year. Between June 2018 and April 2019, users travelled 307,243 miles with an average length of 1 mile per trip.

And after the county signed off on a pilot program to study their effects, more scooter companies have joined the fray to roll out a combined 2,600 scooters to the county’s streets.

But with more scooters came a flood of safety and littering complaints — which the report notes decreased over time as perhaps riders followed rules better, or because of officials responding to complaints by capping scooters’ speeds, installing parking corrals, and restricting users’ ability to ride on some public lands. 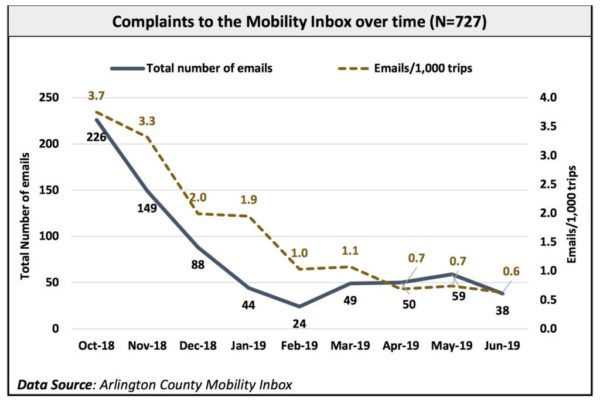 Data from the Arlington County Police Department indicated an increase in the number of reported crashes involving scooters from four in 2018 to eight this year so far. However, measuring the actual number of crashes is difficult as data from the ACPD only captures the incidents reported to the police, and the Dept. of Motor Vehicles did not yet have codes for tracking scooter-related incidents.

Overall, the report’s recommendations mirror those recently issued in Alexandria, where City Councilmembers urged companies to deploy more scooters outside of the Old Town and Del Ray neighborhoods.

“I look forward to the County Board adopting a permanent shared micro-mobility program before the January deadline,” said Burgess. “I also am hopeful that the Board will fix some of their ableist policies that discriminate against e-bikes and will update their bike lane policies to be inclusive and current.”

Map and graph via Arlington County