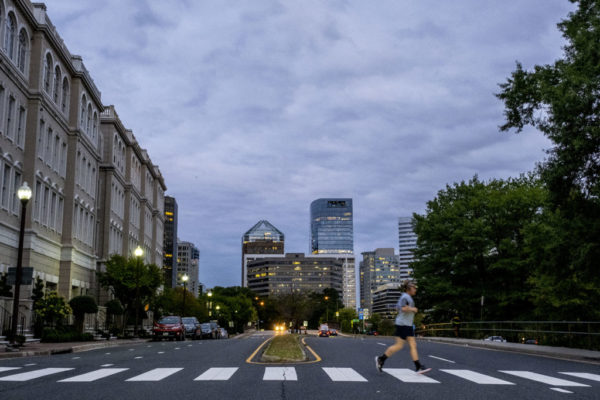 Arlington Rooftop Bar Reopens — After being shut down by county building inspectors, Arlington Rooftop Bar and Grill in Courthouse reopened Tuesday evening, just in time to watch the Nationals sweep the Cardinals in Game 4 of the NLDS, to advance to the first World Series in D.C. since 1933. [Twitter]

Housing Still Hot Near HQ2 — “The median sale price for all home types in the 22202 [zip code, which includes the Pentagon City and Crystal City area] jumped nearly 40% in September compared with the same time last year, reaching $685,000… That makes it nine straight months of home price appreciation for the 22202 area. Arlington County as a whole saw a modest 12% year-to-date increase, $590,000 for all home types.” [Washington Business Journal]

DCA Fee to Help Pay for Expansion Project — “Project Journey, the Metropolitan Washington Airports Authority’s $1 billion capital improvement effort well underway at Reagan National Airport, will be paid for in part by airline passengers. At its meeting Wednesday, the MWAA board will be asked to approve the submission of a new Passenger Facility Charge application… The $4.50 fee is collected by airlines as part of their airfare and remitted to the airport of origin.” [Washington Business Journal]

Caps Dogs Star in Arlington Photoshoot — “In the 2020 Capitals Canine Calendar, you will see 12 months of Washington ice hockey players posing with dogs of all sizes, ages and bark levels… There was plenty of four-legged mischief during the October shoot at the MedStar Capitals Iceplex in Arlington.” [Washington Post, Twitter]

Nearby: New Restaurant in Arlandria — “The new Taqueria Senora Lola is now open at 3901 Mount Vernon Avenue in Arlandria. Owner Oswaldo Salinas said the restaurant — adjacent to Salinas’ other eatery, Lilian’s Restaurant, opened two weeks ago and had a grand opening event this past Saturday.” [ALXnow]