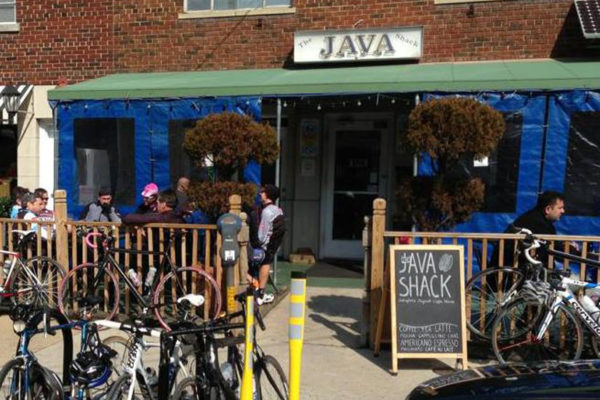 The Java Shack, a beloved local coffee shop in the Lyon Village neighborhood near Courthouse, is planning to close.

Commonwealth Joe, which took over the cafe at 2507 N. Franklin Road from its original owner five years ago, made the announcement Friday morning after informing staff of its plans.

Java Shack will serve its final mugs of coffee on Nov. 24, unless Commonwealth Joe can find a buyer for the business “that understands and respects the rich heritage of the cafe and the important role it plays in the community.”

One frequent customer said the loss of Java Shack would be a detriment to the sense of community that unique local businesses like it help to build.

“I live down the street from Java Shack and it’s a huge loss for me to know that they’re closing,” Jacob Gersh told ARLnow, noting that he recently filled his fourth punch card at the shop, marking 40 cups of coffee. “It’s such a powerful feeling of connection to the community to be able to sit in their garden.”

Commonwealth Joe says it was not able to negotiate a new lease that would allow it to continue operating Java Shack. It will instead focus on its Pentagon City cafe, near Amazon’s future HQ2, and its growing coffee keg business.

Maintenance of the aging building on Franklin Road — which once housed the headquarters of the American Nazi Party but is now home to Java Shack, a barber and a pet store — has been a challenge for the cafe’s owners.

“The Java Shack holds a special place in our hearts,” said Commonwealth Joe co-founder and CEO Robert Peck. “However apart from the great memories and successes we had at the cafe, our building lease brought some hardships.”

Commonwealth Joe Coffee Roasters (CWJ), the owner and operator of The Java Shack in North Arlington, announced today that it will not be renewing its lease on The Java Shack retail space once the term ends at the end of the year. This decision was made for several reasons. Most notably, CWJ was unable to attain favorable new lease terms and the company has needed to prioritize its limited resources towards the growing demand for its full-service kegged beverage program, which is geared at proving on-tap craft beverages where people work, live, and play.

CWJ is open to selling The Java Shack business or the brand to any party that understands and respects the rich heritage of the cafe and the important role it plays in the community. Interested parties would need to plan on using a different location.

Previously owned and operated for nearly 20 years by Dale Roberts, The Java Shack legacy was taken over by Commonwealth Joe Coffee Roasters in 2015. Over the years, The Java Shack has remained an artsy, down to earth establishment serving fresh-roasted coffee to the community — a contrast with Commonwealth Joe’s artisanal and industrial flagship cafe in Pentagon City.

CEO and Co-Founder of Commonwealth Joe, Robert Peck, commented on the company’s decision, “The Java Shack holds a special place in our hearts. Many of us at Commonwealth Joe furthered our education in coffee at The Java Shack. It’s where we crafted our first batches of cold brew. It was a space in which our leadership team held pivotal meetings that helped grow the business. A lot of relationships and community have been built there. However apart from the great memories and successes we had at the cafe, our building lease brought some hardships. Over the years, we have invested a substantial amount of time and resources into maintenance and building repairs to create a safe and welcoming environment for our staff and customers. Unfortunately, we were not able to come to an agreement with the landlord on new terms for the lease or how to share in some of these expenses moving forward, so the end of our current lease this year presented a natural opportunity to say goodbye.”

Commonwealth Joe welcomes opportunities to discuss selling the business or the brand to other parties. Interested parties should contact [email protected] for more information. The company will plan to issue a statement in-store and via social media once more operating details have been finalized.