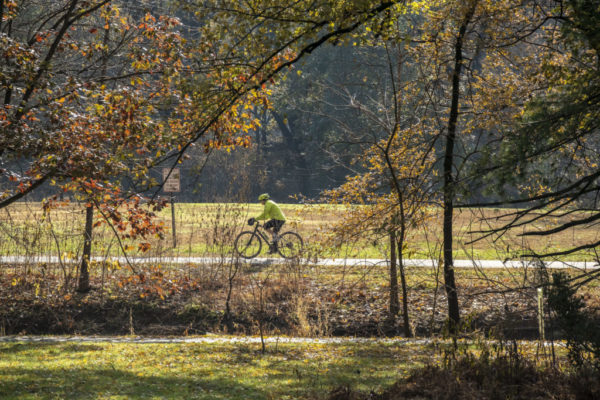 The Arlington County Board has signed off for NOVA Parks to apply for a $5.6 million grant that would widen a portion of the Washington and Old Dominion Trail.

If approved, the project will widen two miles of the W&OD Trail between N. Roosevelt Street and N. Carlin Springs Road by eight feet. In addition, the trail will incorporate a “dual path” to divide walkers and cyclists.

“When I talk to trail users I hear the same complaint, which I will attribute to Yogi Berra, ‘No one goes there anymore because it’s too crowded,'” said chairman of NOVA Parks Michael Nardolilli during Tuesday’s recessed County Board meeting.

Officials are expected to know if the grant, submitted to the Northern Virginia Transportation Authority (NVTA), has been approved by June 2020. If it is, the County Board will review the project plans before giving an official vote on whether to begin construction.

Nearly a dozen people spoke in opposition the project during Tuesday’s meeting. Many stressed that the project it could destroy a large number of trees and damage storm water management, while others expressed disappointment in what they describe as NOVA Park’s lack of public outreach.

Among the groups opposed to the widening is Arlington Tree Action Group, which called it — perhaps a bit hyperbolically — “the most environmentally destructive project that has ever occurred in Arlington’s public spaces.”

“My commission learned of this a week ago with no information about what was being planned,” said Phil Klingelhofer, chair of the Arlington Urban Forestry Commission, a county commission that is also concerned about the project. “[This] is in fact putting a multi-lane highway for bikes through the middle of the park.”

“This whole conversation tonight has been one big, giant paradox,” said County Board member Eric Gutshall. “I can’t wrap my head around folks who are concerned about preserving nature and trees, allies to those interested in cycling and using alternative modes of transportation to be a part of larger, sustainable society — somehow, you’re against bicycling and trails.”

The County Board unanimously signed off on the application, with two recommendations for County Manager Mark Schwartz:

(1) Determine the data and analyses that NOVA Parks must submit to substantiate the safety and levels of service concerns along the subject street of the W&OD trail, and (2) initiate a process with NOVA Parks to determine the appropriate level of public engagement for the project along with the information that must be developed and presented…[including] plans to address environmental stewardship including impact on vegetation, flood risk management, erosion, and natural habitats.

“Our support for the seeking of funding, so those plans can be drafted, does not mean endorsement of the final design,” said County Board member Libby Garvey.

END_OF_DOCUMENT_TOKEN_TO_BE_REPLACED

More Stories
Residential Parking Changes On the Way: “It’s Going to be a Doozy”The Ritz-Carlton, Pentagon City Celebrates the Coziest Time of the Year