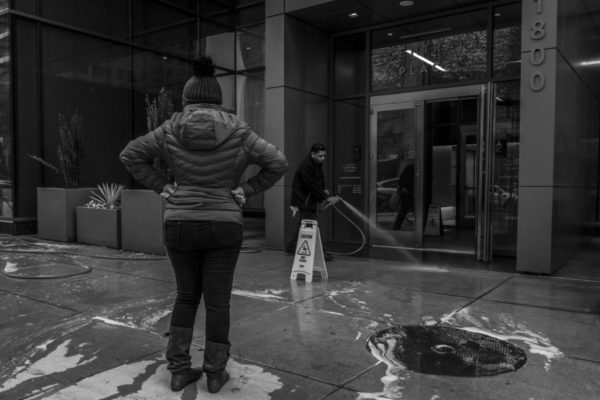 Crows Are Swarming Rosslyn at Dusk — “As the sun begins to sink below the horizon, ghostly caws and flapping wings echo through the air. Then, they come in droves. Hundreds, if not thousands, of huge, black birds darken the sky, swooping through buildings and swarming like giant gnats. This Hitchcockian scene is a typical Tuesday in North Rosslyn.” [Washingtonian]

New Candidate for School Board — Cristina Diaz-Torres has announced that she is running for Arlington School Board to replace Tannia Talento, who is not seeking a second term. Diaz-Torres is planning a campaign launch event on Columbia Pike this Sunday. [Twitter, Facebook]

Arlington Residents Are Up at All Hours — “The massive Nov. 8 water-main break underneath Chain Bridge Road taught Arlington public-works officials a number of lessons. Among them: Some county residents are up and at ’em in the wee hours of the morning. The county government received its first call complaining of no water at 2:59 a.m., a mere three minutes after the rupture of the 36-inch, 75-year-old pipe.” [InsideNova]

More on GMU Arlington Campus Expansion — “As George Mason University leaders celebrate the 40th anniversary of the school’s Arlington campus, they promise that its Amazon-inspired expansion will be ‘unlike any building ever built’ by a state institution.” [Washington Business Journal]

Upgrades for 911 Call Center — “The County’s 9-1-1 call processing system was upgraded today! Our staff are thrilled to have made the switch to this top of the line system that will allow us to best collaborate with neighboring jurisdictions and serve the community.” [Twitter]

Five Year Anniversary of Streetcar Cancellation — “Five years ago this week – Nov. 18, 2014 – County Board Chairman Jay Fisette stood somewhat grimly in front of a microphone and TV cameras to announce that Arlington officials were abandoning plans for a streetcar system in the Columbia Pike corridor.” [InsideNova]

A lonely utility pole protruding into the intersection of Columbia Pike and S. Frederick Street is expected to come down by the end of the year, a county official tells…

Arlington Has High Kid Vax Rate — “Virginia schools have about 420,000 children between the ages of 12 and 15, and about 63 percent of them have received at least…

The University of Virginia is expanding its footprint in Northern Virginia, including its Rosslyn campus. The university currently operates a satellite location of its Darden School of Business in the…