A $2.6 million project to renovate Benjamin Banneker Park will close the park and a portion of the W&OD Trail starting the week after Thanksgiving.

The project, which was given the green light in September, will widen the trails from 8 to 12 feet and upgrade the athletic field, playground, picnic area, dog park and more. 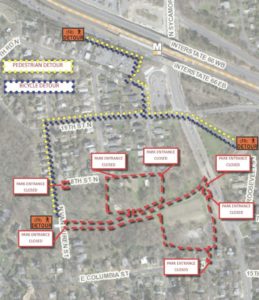 The park closure and trail detour were originally advertised as starting this week, but everything is still open, for now.

“We are giving people a two week notice to make adjustments,” said Arlington Dept. of Parks and Recreation spokeswoman Susan Kalish. “The trail and park will close December 3. We’ve provided detour recommendations on sandwich boards around the park as well as online. We are putting up a banner at the dog park directing people to the web to find an alternative dog park.”

Not everyone is happy about the trail detour, which will redirect pedestrian and bike traffic from the park — near the East Falls Church Metro station — to the busy intersection of N. Sycamore Street and 19th Street N., which has traffic lights and pedestrian crossing signals.

“Many of us are caught off guard with the total closure of the trail between the creek and the soccer field for the duration of the project,” said Kelly Alexis, a local resident, in an email to county staff that she also sent to ARLnow and other concerned residents.

“Arlington County has provided only one re-route option — funneling all pedestrian and bicycle traffic to the most congested possible intersection; passing across the entry and exit to the EFC Metro Kiss-and-ride lot,” Alexis continued. “This was not part of the plan that was presented to us at the open meetings and has a major impact on bicycle and pedestrian traffic.”

In response to a request to complete trail construction first, before the other park changes, a county staffer said that was not a viable option for a number of reasons. Among them: the need to fence off the trail from the rest of the under-construction park — thus creating “a safety concern for users who would then have very limited egress through a long confined corridor in the park if they were endangered or injured.”

Kalish said she is not aware of any plans to make changes to the detour.

Construction is currently expected to wrap up between July and September of 2020, according to the county website.