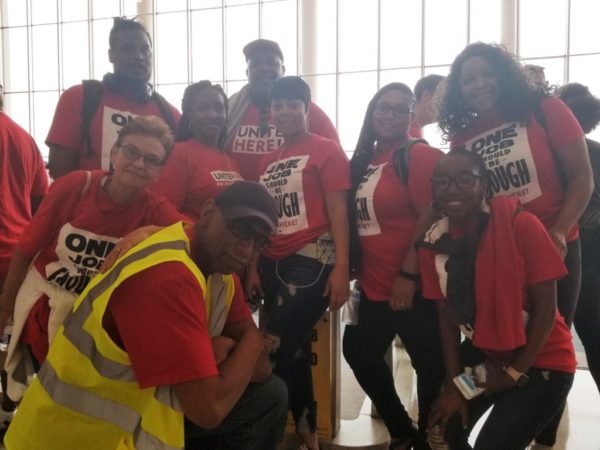 Airline catering workers at Reagan National Airport are planning to picket and stage a sit-in today to protest “poverty wages [and] expensive healthcare.”

The workers, who work for companies contracted by the airlines, are paid as little as $12.15 an hour and many don’t receive company-provided healthcare, according to labor union UNITE HERE Local 23.

Around 5:30 p.m. today, on perhaps the busiest travel day of the year, workers are planning to engage in “informational picketing,” followed by a “nonviolent civil disobedience sit-in” at DCA’s American Airlines Terminal C.

This is the latest in a series of labor actions targeting airline contractors at National Airport over the past few years — including one recent rally with Democratic presidential candidates Bernie Sanders and Elizabeth Warren.

This protest is set to be the latest in a series of demonstrations by airline catering workers at U.S. airports. Though their work is essential to airline operations, wages are as low as $12.15 an hour. Only 32% of workers at LSG Sky Chefs at DCA had company healthcare in 2018, and only 10% covered any dependents. Meanwhile, American reported a 2018 annual profit of $1.9 billion. Workers hope that by bringing their message to the many passengers travelling before Thanksgiving, they will motivate American to resolve the labor dispute.

In addition to ongoing protest activity at DCA, previous large-scale demonstrations calling attention to American Airlines have already taken place this year in Washington, D.C., Philadelphia, and Dallas-Ft. Worth–where over 50 were arrested in a civil disobedience near American Airlines’ headquarters and largest hub airport. This past summer UNITE HERE airline catering workers at DCA voted overwhelmingly to strike when released by the National Mediation Board. Federal mediation of contract negotiations continues.

In D.C., where the Metropolitan Washington Airports Authority passed a workers wage policy in 2017, the Board’s resolution stated that MWAA would review the policy no later than December 31, 2019. The last scheduled raise in the MWAA policy is for $12.75 on January 1, 2020, and then will rise with inflation. Meanwhile, the minimum wage in D.C. is already $14, rising to $15 on July 1, 2020, and then rising with inflation. Workers are pushing MWAA to raise the minimum wage for all airport workers to catch up to the rising minimum wage in D.C., and address the growing health care crisis at Reagan National and Dulles International Airports.