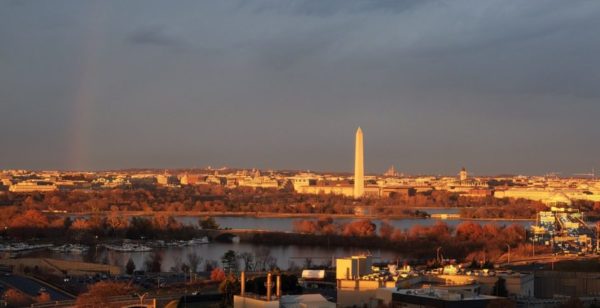 Confusing Lane Markings on I-395 — “Drivers are complaining about mis-matched lane striping on… 395 South near Shirlington.” [NBC 4, Twitter]

Pedestrian Struck Near Clarendon — “A woman was just struck by a car on N. Pershing Drive at Fillmore Street in Lyon Park. Only minor injuries reported. Police and firefighters on scene.” [Twitter/@ARLnowDOTcom]

Crystal City Hilton Sold — “Starwood Capital Group has made its second acquisition in the area around Amazon HQ2 this year. The Miami-based firm acquired a 393-room hotel in Crystal City from a fund affiliated with JBG Smith for $73M.” [Bisnow, Washington Business Journal]

Housing May Dominate Budget Discussion — “Board members directed, as part of their fiscal 2021 budget guidance to County Manager Mark Schwartz, that budget plans include an option to increase affordable-housing funding to as much as $25 million, a 56-percent increase from the $16 million Affordable Housing Investment Fund (AHIF) funding approved for the current fiscal year…. [but] raising expectations of affordable-housing advocates could pit them against proponents of other budget priorities.” [InsideNova]

ACFD Assists With School Project — “Tower 104 assisted students [at] Science Focus School today with their annual egg drop. The students were able to collect some data & a good time was had by all.” [Twitter/@ArlingtonVaFD]