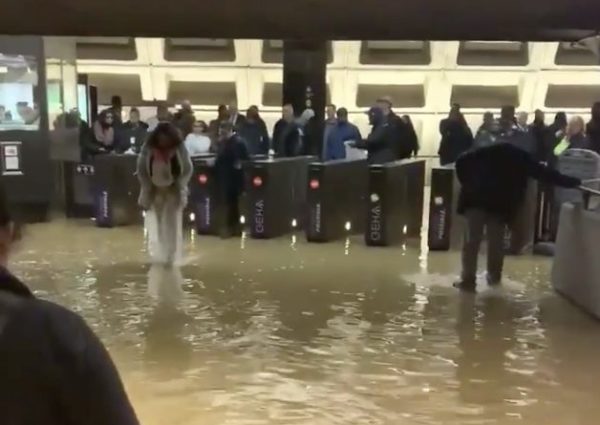 (Updated at 4:05 p.m.) An entrance to the Pentagon Metro station is expected to close soon, temporarily and during off-peak hours, to allow for water infrastructure work following flooding at the station.

A pipe burst on Nov. 27, filling part of the station with several inches of standing water. Metro says a new water supply pipe will need to be constructed, as repairs are not feasible for the original pipe, which runs under the Pentagon itself and dates back to the station’s original construction.

An exact date for the start of the temporary closure was not given. Shortly after a contract to construct the new water line is awarded, the north entrance to the Metro station is expected to close “outside of weekday rush hours,” Metro said.

Metro customers entering or exiting Pentagon Station during off-peak travel times will need to use the “South Entrance” escalators or the elevators due entrance configuration changes associated with the construction of a new water supply line to serve the station’s facilities, including employee restrooms and maintenance sinks.

Dating to the station’s original construction, the original water supply pipe failed on November 27, sending water streaming into the station through air ducts and elevator shafts. The rush of water dislodged some ductwork, and caused a partial ceiling collapse in a service room. The station was closed for several hours to remove several inches water that had accumulated on the mezzanine level.

Because the original water line runs beneath the Pentagon — an inaccessible location — Metro engineers have recommended abandoning the original pipe and constructing a new water line on a new route around the building.

The Pentagon has been an active and supportive partner to expedite the construction process and necessary security clearances for workers. Metro has already engaged its contractor community and expects to award a contract as early as next week. Once a construction contract is awarded and a formal schedule is developed, Metro will update customers on the expected duration of the project.

Due to construction activity and security considerations associated with the portable restrooms, Metro is advising customers who use Pentagon Station to expect entrance configuration changes during off-peak travel times. The changes will continue until a new water line is constructed and water service is restored to the station, a process that likely will take several weeks.

Specifically, outside of weekday rush hours, the station’s “North Entrance” will be closed and all customers will need to use the South Entrance, which will remain open at all times.

During rush hours–Monday through Friday, 5:00-9:30 a.m. and 3:00-7:00 p.m.–the North and South entrances will both be open and available for customers. Elevator service to the station will be available at all times.

Rail service on the Blue and Yellow lines is not affected by this project.