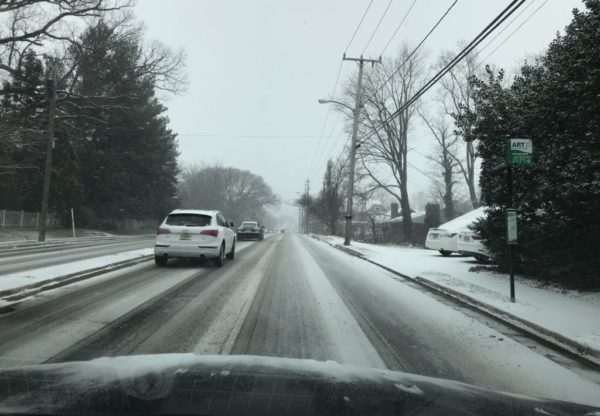 (Updated at 3:55 p.m.) Though it’s likely to be more wet than wild in Arlington, Wednesday morning’s commute may still be made more difficult by snow.

Up to an inch of snow is expected to fall overnight, though temperatures are expected to stay above freezing. Roads are expected to remain mostly clear locally, but the first snowfall of the season may nonetheless cause some concerns for motorists during the morning rush.

There is a potential for hazardous commuting conditions for the Wednesday morning commute. A period of accumulating snow is POSSIBLE Wednesday morning across the Baltimore MD/Washington DC metro areas, with up to an inch of snow accumulation possible on area roads, with the highest chances north and west of Interstate 95.

If this threat does materialize during the Wednesday morning rush-hour, many roads could quickly turn slippery and visibility may be reduced. This could lead to dangerous traveling conditions, multiple accidents, and extensive delays.

If commuting Wednesday morning, be aware of the POSSIBILITY of significant travel disruptions. Plan ahead by allowing for extra travel time, and consider using public transportation and telework options.

VDOT and Arlington County’s Dept. of Environmental Services say crews are not able to pre-treat roads due to today’s rain, but will begin mobilizing tonight in preparation of the snow.

VDOT is urging drivers to be cautious once the flakes starts falling.

The worst of the weather is expected north of the immediate metro area. Arlington is outside the area of a Winter Weather Advisory issued Tuesday afternoon.

A Winter Weather Advisory has been issued for areas in purple. Rain showers are expected to change to snow around or after midnight. The Wednesday morning commute may be impacted. For more info: https://t.co/ZOlvESgJ2H pic.twitter.com/xXovOgTyK1

Trace amounts to 1" most likely around immediate area – mainly on grass. Unlikely, but might see a school delay or two in counties W & NW of DC. SchoolCast later. Snow likely over before sunrise except far southeast areas. (2/2) pic.twitter.com/JIehRvtYaJ