Construction on four new transit stations along Columbia Pike is set to begin this week, per county officials.

Nearly seven years after the uproar over the million dollar bus stop, the county awarded a $1.64 million contract to build the first 4 out of 23 planned bus stops along the Pike. The stations include large glass shelters, seating, lighting, trash cans, real time bus arrival displays and a higher curb for easier boarding.

Per the construction map, the new stations will be located near the intersections of:

Work will begin at the South Four Mile Run Drive location, then move to the other locations in the order listed above. The current bus stop at Four Mile Run Drive will be moved one block east to Columbia Pike and South Wakefield Street during construction.

Constructing the stations will be a two-step process. First, our contractor will build the supporting infrastructure for the four stations, then they will return to each site to install the shelters and other station features. It will take several months to construct each location’s supporting infrastructure, which includes an 85 to 120-foot-long station platform with higher curb, the shelter foundation, a concrete bus pad in the roadway and electrical connections.

Installation of the station shelters is expected to start in summer 2020, once the fabricator, which is manufacturing the shelters for all 23 station locations, begins production.

Arlington’s 2019-2028 Capital Improvement Plan allocates a total of $16.9 million for the 23 stations, which includes the above-ground structures and supporting infrastructure, site design, project management and construction costs. The remaining stations are expected to be constructed between 2020-2023.

The county withdrew its original construction plans six years ago after the the prototype cost of the Walter Reed Drive stop, first reported by ARLnow, was revealed to cost over $1 million. The plans drew outrage from the public and attention from national and international press. 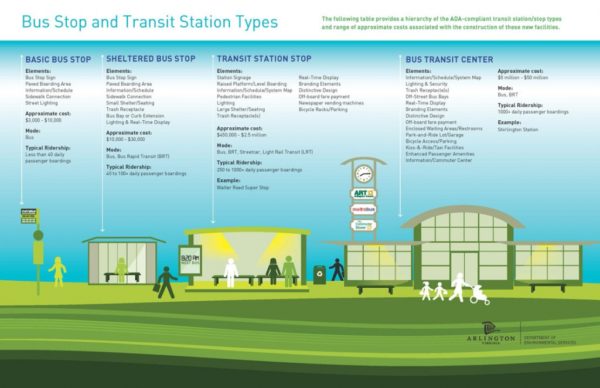