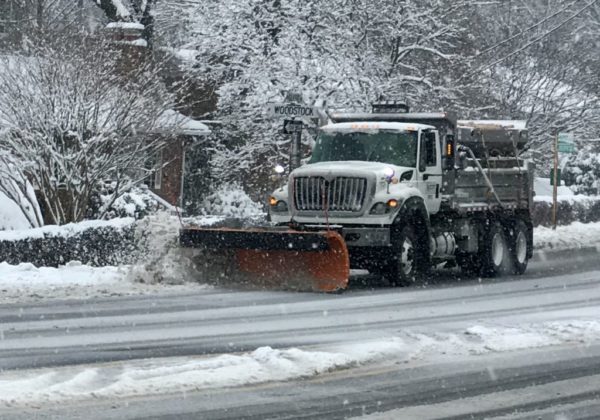 Update at 12:55 p.m. — Arlington County government offices and facilities are remaining open for the time being, but parks department programs in school and park facilities are cancelled after 2 p.m., the county says.

Update at 11:35 a.m. — Arlington Public Schools is dismissing two hours early tonight, as the onset of snow may be earlier than originally expected. From APS:

Update at 11 a.m. — Arlington County says it’s salting bridges and hills in anticipation of the snow. The Office of Personnel Management, meanwhile, says federal offices will have an early dismissal by 1 p.m. today.

Crews are set to salt bridges and hilly roadways ahead of forecast snow this afternoon. Temperatures are expected to dip below freezing during pm rush hour with total accumulation expected to be about 1.5 inches. Know the snow removal phases: https://t.co/JnvPU3bK6U. #ArlWX pic.twitter.com/L69IsAMAw4

Earlier: A Winter Weather Advisory is in effect from noon to 7 p.m. today, as the D.C. region braces for the first significant snowfall of the season.

The snow is expected to start falling this afternoon and to impact the evening rush hour. Fairfax County and other school systems have announced early dismissals today, though as of 9:45 a.m. Arlington had not made any such announcement.

Some 1-2 inches of snow is expected locally.

…WINTER WEATHER ADVISORY IN EFFECT FROM NOON TODAY TO 7 PM EST THIS EVENING… * WHAT…WET SNOW EXPECTED. TOTAL SNOW ACCUMULATIONS AN INCH OR TWO. * WHERE…IN DISTRICT OF COLUMBIA, DISTRICT OF COLUMBIA. IN VIRGINIA, ARLINGTON/FALLS CHURCH/ALEXANDRIA. * WHEN…FROM NOON TO 7 PM EST TUESDAY. THE HEAVIEST SNOW IS EXPECTED BETWEEN 3 PM AND 6 PM TUESDAY AFTERNOON INTO EARLY TUESDAY EVENING. * IMPACTS…SNOW COVERED AND SLIPPERY ROADS ARE EXPECTED, ESPECIALLY NORTHWEST OF INTERSTATE 95 INTO THE EVENING COMMUTE. * ADDITIONAL DETAILS…SNOW RATES COULD EXCEED ONE INCH PER HOUR WITH VISIBILITY AROUND ONE-HALF MILE AT TIMES. PRECAUTIONARY/PREPAREDNESS ACTIONS… SLOW DOWN AND USE CAUTION WHILE TRAVELING. WHEN VENTURING OUTSIDE, WATCH YOUR FIRST FEW STEPS TAKEN ON STEPS, SIDEWALKS, AND DRIVEWAYS, WHICH COULD BE ICY AND SLIPPERY, INCREASING YOUR RISK OF A FALL AND INJURY. &&

VDOT says it is pretreating local roads and highways. The transportation agency is advising drivers to be careful on the roads tonight and to consider leaving work early.

Continue to closely monitor weather, as forecasts can improve or worsen quickly. Stay tuned to local media for the real-time status of weather bands before traveling, due to the likelihood for limited visibility.

If road conditions become hazardous, delay travel for your safety and to give trucks time to treat roads. Leave earlier or delay trips to avoid driving during the height of the storm.

Before traveling, check road conditions along your route at www.511virginia.org, on the free app for Apple and Android, or call 511 from any phone in Virginia.

Be aware of the potential for slick spots on areas prone to freezing such as bridges, ramps and overpasses.

Give trucks plenty of room to work, because they are large, heavy and slow.

Winter Weather Advisory has been expanded to include the District of Columbia, Arlington County, City of Alexandria, and western Maryland. #DCwx #MDwx #VAwx #WVwx pic.twitter.com/own9xK8GTf

Snow will be affecting the area today, and will be heavy for a couple of hours this afternoon. Biggest concerns are the timing and intensity of this burst. Find the most likely start time on the graphic. Full details at https://t.co/ZOlvESgJ2H. pic.twitter.com/ih7HuDpN4T

PLAN AHEAD: A Winter Weather Advisory is in effect for @ArlingtonVA from 12 – 7 PM. Monitor weather conditions and plan to adjust travel as necessary. https://t.co/09ofsdnZFS