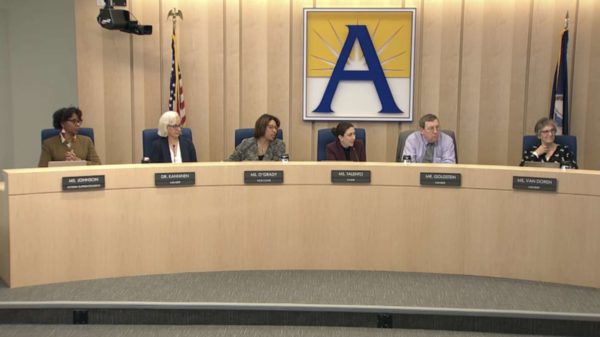 Equity was the buzzword of the night as five Arlington School Board candidates announced their candidacy at an Arlington County Democratic Committee meeting last week.

Two incumbent School Board members, Tannia Talento and Nancy Van Doren, are not running for reelection, leaving two of the five School Board seats open. A video posted by Blue Virginia showed each of the five Democratic candidates running for those two seats making their pitch at last week’s meeting.

(While School Board races in Virginia are nonpartisan, Arlington Democrats hold an endorsement caucus that functions as a defacto primary.)

In speaking order, the candidates were:

Symone Walker: An attorney and parent of two students at Gunston Middle School, Walker’s campaign speech was the first of the evening to focus on equity. Walker said every decision needs to be made “through an equity lens.” Walker also suggested that schools being more adept at handling student trauma, from training administrators to educating parents on ways to handle emotional situations, could help prevent school shootings.

Cristina Díaz-Torres: Díaz-Torres is a former geometry and AP statistics teacher who said her experience in a classroom that had more students than desks helped inform her decision to try to change education administration.

“[Policies] were made and written by folks who were well intentions but had no experience in classroom,” Díaz-Torres said.

During her speech, Díaz-Torres pledged to deliver teacher compensation that would allow educators to live in Arlington and to eliminate what she described as “deceptive” practices in the way the school system presents data and information to the public.

David Priddy: Priddy — who previously ran for School Board — is an Arlington Public Schools graduate and parent to a student in Thomas Jefferson Middle School. He told Democrats that his business experience gave him experience making cuts and difficult decisions that will help bring a sense of fiscal responsibility to the School Board. Like Walker, Priddy said his campaign would center on securing equity between students. Priddy also vowed to revamp the school district’s boundary process.

Terron Sims: An Iraq War vet and former County Board candidate, Sims said his military experience taught him lessons about accountability and management that he hopes to bring to the School Board. On Sims’ website, he says his goal is to promote more apprenticeship programs at Arlington Tech and the Career Center and to continue to work on securing more community partnerships to help offer opportunities to students.

After the Democratic endorsement caucus, the date of which has yet to be announced, the two new School Board members will be chosen in the Nov. 3 general election.