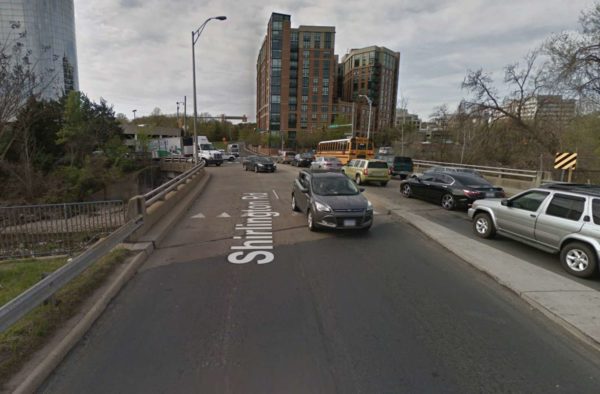 Arlington could finally make progress on a pedestrian and bicycle bridge over Four Mile Run near Shirlington that’s been under discussion for nearly two decades, according to county staff.

Staff told the Transportation Commission at a Jan. 9 meeting that the current bridge, which carries two lanes of vehicular traffic in each direction on Shirlington Road, has inadequate bicycle-pedestrian facilities, with only a 3-5 foot sidewalk available.

Pedestrian access on Shirlington Road has been a thorn in the county’s side for years, with efforts made in the past to widen nearby sidewalks and make them more pedestrian-friendly — while the bridge bottleneck remained.

The bridge itself is still in good condition, staff said, so rather than reconstruct the bridge staff said a new bicycle and pedestrian-only bridge constructed 20 feet to the west would provide an alternative transit route without cutting into traffic on the Shirlington bridge.

The project, staff noted, has already been fully funded in the county’s Capital Improvement Plan, but not plans have moved forward.

An open house for the pedestrian bridge project is scheduled for Feb. 11 from 6-8 p.m., in which nearby civic associations will be invited, though the location of the open house was not announced. Staff said renderings for the bridge will be available at the open house.

“We are starting to implement what came out of the Four Mile Run area plan,” staff said.

The Four Mile Run plan also considered a, underpass running beneath the bridge, negating the need for cyclists and other trail users to cross busy Shirlington Road, though that was not discussed at the Transportation Commission meeting. Arlington County is currently working on a $15.5 million renovation project for Jennie Dean Park, adjacent to the future bridge.