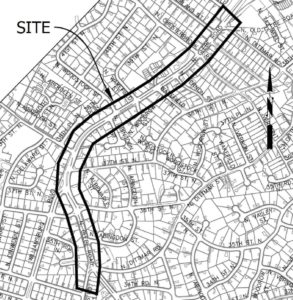 The Arlington County Board this weekend is set to consider a $4.5 million contract to rehabilitate an out-of-service water main in the middle of N. Glebe Road.

The 36-inch transmission main — the same size as the large pipe that burst and shut down N. Glebe Road near Chain Bridge in November — was placed out of service in 2013 due to concerns about a catastrophic failure. A transmission line was built parallel to it after a major water main break on N. Old Glebe Road in 2009 and is currently providing service to the area.

County officials say rehabbing the old main, which was built in 1972, will help provide redundancy in the county’s water system. Arlington’s water comes from the Washington Aqueduct in D.C., by way of pipes that cross the Potomac River at Chain Bridge then branch out to various parts of the county.

The project will run along N. Glebe Road from Old Glebe Road to Little Falls Road — a distance of about 0.8 miles. Residents should expect lane closures and daytime water service interruptions during the course of the project, the county staffers said in a report to the County Board.

The Board is expected to vote on the contract at its meeting this Saturday.

Upon contract award and before the start of construction, a detailed letter about the project and construction schedule will be sent to the presidents of both Civic Associations and then be distributed to residents who will be directly impacted by the project. Additionally, water service disruptions will be coordinated with the affected residents in advance of any shutdowns. All shutdowns will be limited to construction hours during the work day.