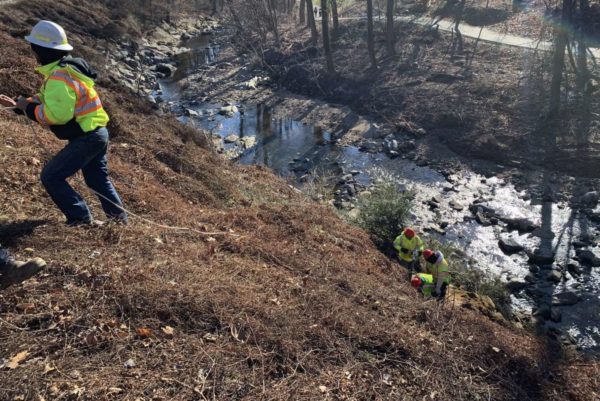 You’re probably not taking Fido to play in the creek in sub-freezing weather, but you’ll want to nix any such plans at the Shirlington dog park for the next couple of days.

Arlington County crews braved freezing weather on the Martin Luther King Jr. holiday to repair an 8-inch sewer line that failed and sent sewage spewing into Four Mile Run, near the Barcroft neighborhood, for the second week in a row.

“The Department of Environmental Services advises to avoid all contact with Four Mile Run south of 7th Street due to a sanitary sewage release,” said an Arlington Alert message on Sunday afternoon. “Blockage was removed from the same pipe after a release last week. Crews on scene investigating pipe’s condition.”

As of Tuesday morning, the department said repairs had been completed. All people and pets, however, should avoid Four Mile Run downstream of 7th Street S. until at least Wednesday night.

As a result of the sewage release, a planned MLK, Jr. Day of Service trash cleanup along the stream has been postponed until Saturday, Feb. 1.