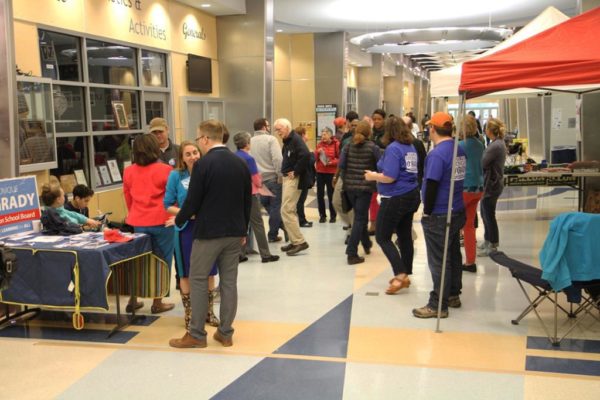 A caucus will be held in May to determine the Democratic endorsees for Arlington School Board.

The Arlington County Democratic Committee announced the caucus dates and format last week. It will be split between two separate days and at two locations, though caucus goers will only need to show up once:

The deadline to file as a candidate is March 2. This year’s School Board election will fill two empty seats. The announced candidates so far include:

School Board races in Virginia are considered nonpartisan, and candidates technically run as independents, but the Arlington Democrats endorsement caucus serves as a kind of de facto primary.

Separately, the local party announced that that it will hold a primary for the Arlington County Board race on Tuesday, June 9. (The presidential “Super Tuesday” primary in Virginia is happening March 3.)

The general election this year will be hold on Tuesday, Nov. 3.

The full press release from the Arlington County Democratic Committee is below, after the jump.

The Arlington County Democratic Committee (Arlington Dems) has announced dates for caucuses it will host for candidates seeking its endorsement for the two county School Board seats that will be on the Nov. 3 ballot. In the separate race for a County Board seat, Arlington Dems announced the selection of a primary as the method for nominating the Democratic candidate.

“Although the lion’s share of attention will be focused on the presidential election this year, the School Board is one of Arlington County’s most important elected offices,” Arlington Democrats Chair Jill Caiazzo said. “Arlington Dems encourage candidates who are dedicated to Democratic values and policy priorities to seek our endorsement.”

To be considered for the Arlington Dems’ endorsement, candidates must file a letter of intent with the organization by the March 2 deadline, and pay a $432.16 nonrefundable fee (2 percent of a School Board member’s starting salary). Full rules for seeking the endorsement are available on the Arlington Dems’ website.

The seats up for election are now held by incumbent board members Nancy Van Doren and Tannia Talento, who both have announced their intentions not to run for re-election.

If fewer than two candidates seek the endorsement by the March 2 endorsement filing deadline, Arlington Dems’ Steering Committee will determine whether and/or who the committee will endorse.

Arlington Public Schools educates about 28,500 students in 41 elementary, middle, high and secondary schools, and other programs. The fiscal year 2020 budget is about $670 million. The School Board consists of five members who serve overlapping four-year terms.

In the separate County Board race, in which current County Board Chair Libby Garvey has announced her intention to seek reelection, the deadline to file required paperwork with the Virginia Department of Elections for the June 9 primary is March 26. More information is available in this “Candidate Bulletin.” The five-member County Board is Arlington’s governing body. Vested with local legislative powers, the Board oversees a $1.4 billion budget. County Board members, elected at large, serve staggered four-year terms.