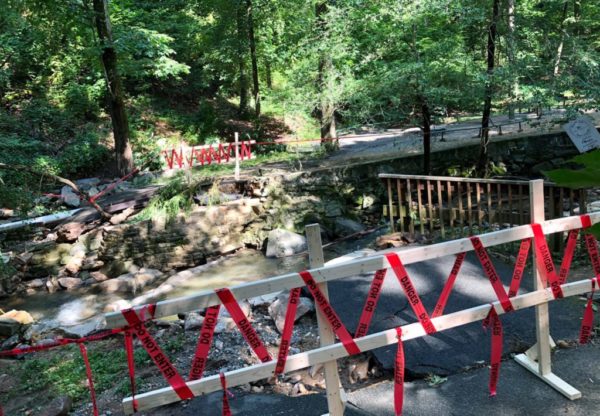 The return of several bridges lost in last summer’s flooding will depend on the upcoming Arlington County budget, officials tell ARLnow.

Arlington homes, businesses, parks and some infrastructure suffered significant damage last year during the July 8 flash flooding. Among the casualties of the storm were seven bridges in parks throughout Arlington.

“There was one in Bon Air and Gulf Branch parks, and two in both Lubber Run and Glencarlyn parks,” Arlington Dept. of Parks and Recreation spokeswoman Susan Kalish said in an email.

A small pedestrian bridge at 38th and Chesterbrook, in the Old Glebe neighborhood, was also destroyed, but has since been replaced. Kalish said it was a simple wooden bridge and there was sufficient funding in the maintenance budget. None of the other destroyed bridges have been replaced.

While the six other bridges have been removed, Kalish said replacing them will be an item considered in the upcoming Capital Improvement Plan — a ten-year plan to address infrastructure issues. Discussion of the proposed CIP is scheduled to run from May to July following the adoption of the operating budget in April.

In addition to the bridges, the restrooms at Bon Air Park are also still closed, and will remain closed indefinitely, the county said in an update on Jan. 24. The update notes that following repairs “all of the [damaged] picnic shelters, volleyball courts and playgrounds are open.”