Arlington is the third-best place for women who work in tech, according to a new study.

The website SmartAsset ranked local jurisdictions by looking at a number of factors — including income relative to housing costs, the gender pay gap, percentage of tech jobs filled by women, and the four-year rate of tech employment growth.

Arlington placed No. 3, while D.C. ranked No. 2 and Baltimore ranked No. 1, according to SmartAsset’s methodology. Per the website:

Arlington, Virginia has consistently ranked as one of the most livable cities in the U.S., partially due to its affordable housing costs as compared to income. In this study, we found that average earnings after housing costs for women working in tech were $65,210 in 2018, the sixth-highest amount for this metric across all 59 cities. Additionally, women constitute 34% of the tech workforce in Arlington, which is the sixth-largest percentage in the study for this metric. 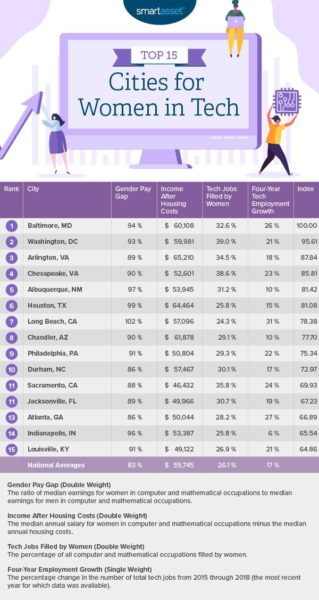 In all, 59 of the largest U.S. cities were ranked.

Arlington ranked highly compared to San Jose, California, in the heart of Silicon Valley, mostly due to lower relative tech employment among women and a larger gender pay gap there. San Jose’s gender pay gap of 83% compared to Arlington’s 89%, while 34.5% of tech jobs in Arlington were filled by women, compared to only 21.5% in San Jose.

Sarah Eastman, a co-founder of Boolean Girl Tech in Arlington, said the county’s recognition is “well-deserved.” The company has earned national recognition for its classroom kits and camps aimed at getting young women interested in coding as part of an effort to combat the gender disparity in the tech industry.

“At Boolean Girl, we see it firsthand in our Ambassador Network, a robust community of local women in STEM who volunteer at our summer camps and Clubhouse, providing role modeling and mentorship for our girls as they learn coding, engineering and other STEM skills,” said Eastman. “These women are emblematic of the impressive talent-level in Arlington, as well as the community’s focus on giving back to the next generation, helping girls learn about STEM in a collaborative and welcoming environment.”

That sentiment was echoed by Alecia Vimala, who recently moved her startup Peercrate, which creates a “social commerce” smartphone app, to Arlington.

“I’ve only been in the area briefly, but based on my experiences, I would say the ranking is absolutely in line,” she said. “Arlington has this fresh energy and enthusiasm around innovation and technology. I feel the tech community provides real opportunities and genuine support for women championing new, innovative ideas in tech.”

There are a number of resources for women in technology in Arlington and the region. Arlington Economic Development has held a number of events focused on helping female entrepreneurs, for instance, while the groups Women Who Tech and Women in Technology are active in the region and hold occasional events.