Fresh off a win at the Small Biz Challenge, Arlington startup Boolean Girl is now headed is to Nationwide’s “Pitch to Win” contest as a finalist.

The company sells classroom kits aimed at getting young women interested in coding as part of an effort to combat the gender disparity in the tech industry.

The Pitch to Win competition is scheduled for Oct. 3 and includes an all-expenses-paid trip to the insurance company’s headquarters in Ohio, where the groups will present their business proposals to a panel of judges. The winning business will be awarded $100,000, with the runner up receiving $20,000 and third place earning $10,000.

Co-founder Ingrid Sanden said the winnings from Pitch to Win would help the company expand into middle-school-age sets.

“Winning the Pitch To Win competition would propel Boolean Girl Tech’s efforts to keep middle school girls engaged and excited about moving from basic coding to complex, real-world projects,” said Sanden. “Typically, there is a dramatic drop off in participation in STEM and computer science classes in middle school, so bridging the gap from elementary to high school and beyond is a crucial step as we close the gender gap in STEM careers.” 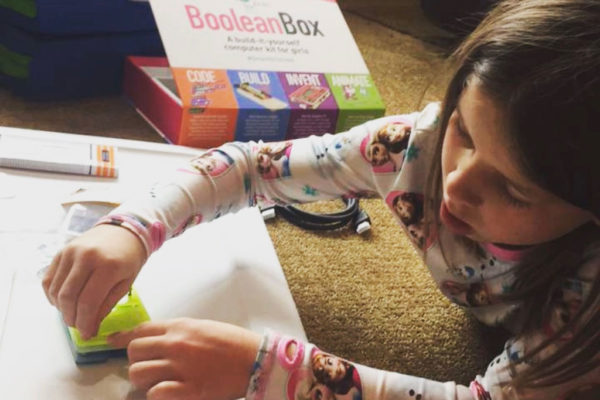 Boolean Girl will be competing with six other companies from across the country, from a skateboard grip tape business to a company that makes AI-enabled digital stethoscopes.

Boolean Girl launched in 2014 around the same time Google’s lack of diversity was making headlines. Since then, the company has developed a build-it-yourself box set for $169.99 and a kit that including ten boxes, ten monitors and a variety of accessories for $5,000. The company also offers a coding summer camp in Arlington.