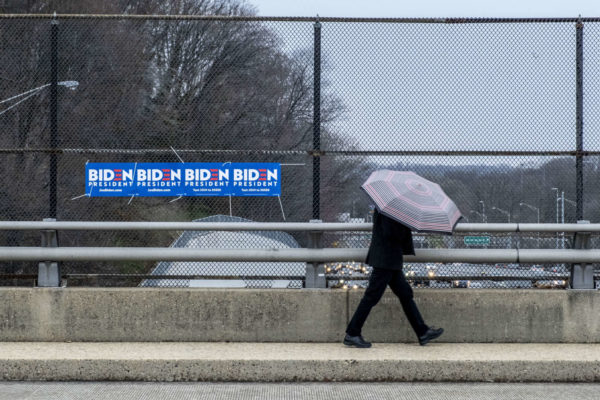 It’s Primary Day — Today is Super Tuesday, the presidential primary day in Virginia and 13 other states across the U.S. In Arlington, polls are open from 6 a.m.-7 p.m. Arlington public schools are closed to students today. [Arlington County, Twitter]

Beyer, Lopez Endorse Biden — Following his decisive victory in the South Carolina primary, former Vice President Joe Biden has picked up endorsements locally from Rep. Don Beyer (D-Va.) and Del. Alfonso Lopez (D). Lopez and former Gov. Terry McAuliffe were stuck in an elevator in Richmond for a half hour yesterday while heading to a Biden event. [Press Release, Twitter]

County OKs Five Scooter Companies — “The lone applicant seeking to provide electric-bicycle service in Arlington has been rejected by county officials, but five operators of electric-scooter devices did make the grade, County Manager Mark Schwartz told County Board members on Feb. 25. The five e-scooter firms – Bird, Jump, Lime, Razor and Skip – were among eight that had sought permission to operate in the county. The other three were rejected for various reasons, including having no speedometers on their devices.” [InsideNova]

Cristol Encourages Volunteering for Erik — “As you may have seen in the news, our colleague and friend, Erik, is facing a tough health challenge…  here’s what we can do for him: Go to a civic association or commission meeting. Volunteer. Embody Erik’s example & make this place better by showing up. And take a picture, and tag it #HereForErik so we can share.” [Twitter]

I-66 Tolling Deemed a Success — “About 700 more people each day total are commuting along the Interstate 66 corridor inside the Capital Beltway now compared to before tolls for solo drivers and an expanded rush-hour period began, and there are also fewer car trips each morning… Virginia state officials have said the goal of the tolls has been to move more people in the corridor, and see the higher count of commuters as a sign the system is working.” [WTOP]

Coworking Space Coming to Courthouse — “Flexible workspace provider Venture X is making its first foray into the Washington, D.C., market, after reaching a deal to take the top floor of the Navy League Building in Arlington, Virginia.” [CoStar]

Cupid the Cat Now Up for Adoption — “Two weeks after undergoing emergency surgery to remove an arrow from his head, Cupid is ready to find a new home. The Animal Welfare League of Arlington’s veterinary director cleared Cupid on Monday, March 2, for adoption.” [Patch]