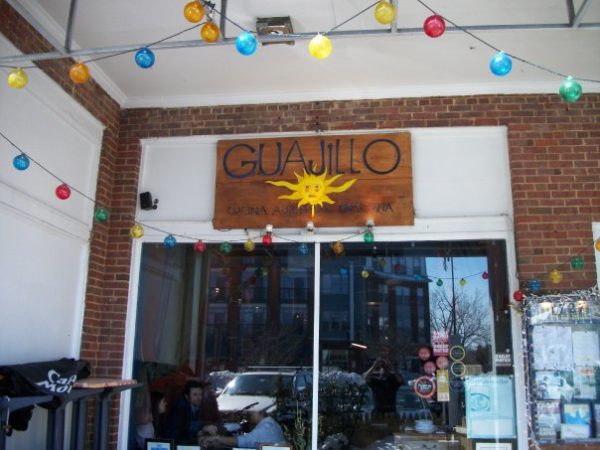 (Updated at 12:40 p.m.) Across the country, restaurants have started suing insurance companies over their refusal to pay business interruption claims.

Many businesses have insurance policies that cover loss of income due to disasters. Restaurants say being forced to shut down by state and local governments to help slow the spread of the coronavirus is such a case and are seeking payments. Insurance companies, however, say the policies mostly cover interruptions caused by property damage, not diseases.

Here in Arlington, at least one restaurant is seeking to press its claim in court. Guajillo Mexican restaurant, at 1727 Wilson Blvd in Rosslyn, filed suit in Arlington Circuit Court against its insurance company on Tuesday.

The restaurant is suing Twin City Fire Insurance Co, which is a part of the Hartford Insurance Group. Guajillo says in the suit that its policy “explicitly covered such loss when caused by a virus, including the salaries and other expenses owed.”

“Guajillo has been in Arlington for about 20 years, and is family owned. They paid for insurance, including business interruption insurance, and expected to get coverage when their business was interrupted,” Scott Rome, an attorney with D.C.-based Veritas Law Firm, tells ARLnow.

“Restaurants operated with the understanding that they were paying for this insurance for just this type of situation, and are being denied across the board by every insurance company,” Rome said. “Here, the policy covers viruses, and yet the insurance company has made no payment yet.”

While Guajillo asserts that its policy covered diseases, the head of an insurance company association suggested otherwise, at least for most business insurance policies, in an interview on CNBC yesterday.

“A pandemic specifically is not something that appeared in many policies,” Sampson said. “The reason that businesses are shut down is not because of damage to property. It’s for fear of human to human transmission of a communicable disease. That’s not a property insurance claim. Now, I’m sure that there are going to be some very enterprising plaintiff’s lawyers out there that are going to try to expand coverage. That’s what they always do. But exploiting this crisis with litigation profiteering will stop America’s recovery even before it starts.”

The Guajillo suit outlines a case that may run counter to the insurance industry’s assertions.

The Policy states that “period of restoration” “begins with the date of direct physical loss or physical damage caused by or resulting from a Covered Cause of Loss at the ‘scheduled premises’.”

The Policy explicitly provides for loss due to a virus through an endorsement: “We will pay for loss or damage by ‘fungi’, wet rot, dry rot, bacteria and virus.” […]

Twin City’s refusal of coverage breached its obligation and responsibility to provide coverage available through the Policy to Guajillo due to its covered loss of business income because its premises are unusable and uninhabitable and have lost all function, which constitutes a direct physical loss under the Policy.

Guajillo is still open for delivery and takeout, but Rome says the pandemic has greatly reduced its revenue.

“Rolando Juarez can be found in his kitchen every day, he is trying to keep all of his staff employed,” the attorney said. “This pandemic has devastated his business. The insurance coverage that he paid for could help this neighborhood family-owned business survive.”