A petition calling for Amazon to halt construction on its $2.5 billion HQ2 project in Pentagon City due to noise has attracted a raft of local media coverage.

The Change.org petition, which as of noon Friday had just over 275 signatures, says the massive construction project should stop as long as a stay-at-home order is in effect in Virginia.

Under ordinary times, the work by Clark Construction in Arlington County to build Amazon HQ2 can be considered excessive, unreasonable and unsafe.

These are not ordinary times — we are all grappling with the severe shock to our daily lives due to the COVID-19 pandemic, especially as many are working from home, and many are with children juggling with competing demands. […]

In addition to the noise issues, there is neither oversight nor accountability in ensuring that Amazon and Clark Construction are maintaining public safety during the COVID-19 pandemic.

The petition attracted coverage from a number of local broadcast outlets this week. WJLA reported that it was started by a resident whose fourth floor apartment faces the construction site. WTOP and Fox 5 quoted County Board member Matt de Ferranti and chair Libby Garvey, who both expressed empathy for residents working at home amid the noise, but stopped short of promising action.

“Now that many people are home during the day, it is especially difficult for them to tolerate the noise and disruption of construction,” Garvey told Fox 5.

The primary noise generator thus far has been pile driving at the HQ2 site along S. Eads Street, for which contractor Clark Construction Group has offered residents of nearby highrises ear plugs.

Clark, meanwhile, said in a construction update that it “is taking every precaution to minimize the risk of infection on our jobsites… as part of our overall COVID-19 management plan.”

Amazon, which has seen its sales and stock soar during the coronavirus crisis, plans to eventually hire 25,000 employees for its second headquarters, and currently has more than 500 job listings in Arlington. 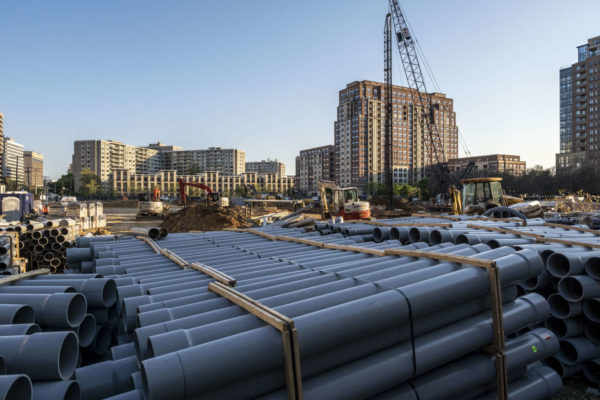