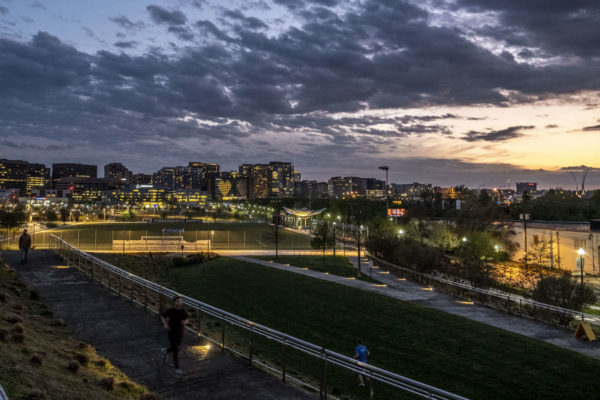 During the pandemic ARLnow has been thanking the small business that have stuck with us through these tough times.

We are also thanking some of the other types of organizations that sponsor the site. Today we’re spotlighting one of our longest running advertisers, the Crystal City (soon to be National Landing) Business Improvement District.

The BID has been sponsoring ARLnow so long that when it started doing so people were still writing articles asking if Crystal City would ever be a “hip place to live.” Well, now HQ2 is arriving and, pre-COVID, the 22202 zip code became one of the hottest real estate markets in the nation. So there.

We always believed in Crystal City, and we’re proud to have the BID as a sponsor.

The virus has unfortunately temporarily put the kibosh on the BID’s signature events — a 5K Friday followed by a trip to the pop-up beer and wine garden would be nice right about now — but there’s plenty more that they’re doing, from commissioning artwork for local storefronts to hosting a new weekly video series “featuring a different local business owner who will bring tutorials, how-tos and entertaining content directly to you at home.”

Crystal City is also home to a vibrant collection of local businesses, from Freddie’s Beach Bar (recently in the news) to an empanada stand that bravely opened in the middle of a pandemic. To see which local businesses in the community are currently open, the BID has a handy list.

Thank you, Crystal City BID, for supporting local journalism during this crisis.