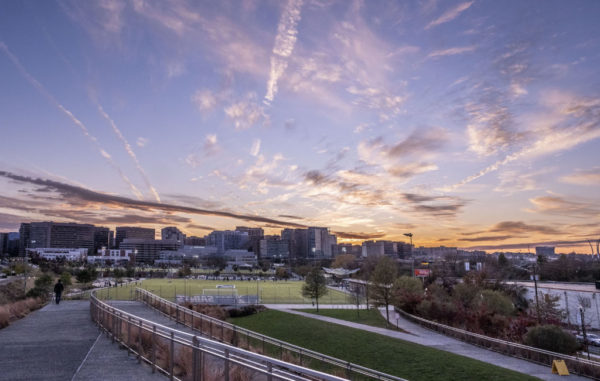 The name change follows the September approval of the BID’s boundary expansion to serve portions of the Pentagon City and Potomac Yard neighborhoods.

Tracy Sayegh Gabriel, president and executive director of the to-be-renamed BID, emphasized in a statement (below) that National Landing is an umbrella term and that the names of the individual neighborhoods are not changing.

We are pleased to report that on January 23 our Board of Directors approved a resolution to change our organizational name to the National Landing Business Improvement District. The Board opted for the new name in recognition of the BID’s upcoming geographic expansion and as a reflection of the increasingly interconnected character of the Crystal City, Pentagon City and Potomac Yard communities. This resolution marks the culmination of a robust public process in which the BID sought and received broad support from area residents and local civic organizations.

Pending approval by the Arlington County Board and a formal vote by the BID’s full members at our Annual Meeting this spring, the National Landing name will be utilized as an umbrella term for Virginia’s most vibrant and largest walkable downtown. It will not replace the existing neighborhood names of Crystal City, Pentagon City and Potomac Yard, which each maintain their own unique identities and distinct characteristics.

The BID is also seeking to change the term those in economic development and commercial real estate use to refer to the area — from the “Jefferson Davis Corridor,” after the former name of Route 1, to National Landing. Gabriel said the Confederate president’s name “did not represent a desirable monicker for the area.”

In an phone interview with ARLnow this morning, Gabriel acknowledged that the initial rollout of the National Landing name — when Amazon arbitrarily announced that HQ2 was coming to “National Landing” before members of the public had heard of the name — was “not ideal.” She noted, however, that the name was actually created by Arlington and Alexandria officials as part of the local governments’ joint effort to woo Amazon and the Virginia Tech Innovation Campus.

The BID, meanwhile, has been working to change its name since before Amazon’s announcement.

“Since the name has come out, we’ve done extensive public outreach. We put out 18,000 flyers, 16,000 of which were mailed to all of the households in the 22202 zip code,” she noted. Other outreach included “numerous open houses about the vision for the neighborhood, as well as focus groups and open office hours.”

There were other possible names floated, we’re told, but none garnered more public support than National Landing. Among the alternative names considered were “Future Cities,” “Lower Arlington” and “Penn-Crystal.”

Gabriel said having support for “National Landing” from the area’s civic associations was key to moving forward with the name.

“The real tipping point of adoption was seeing its use among the local civic associations,” she said.

In addition to the name change and the rebranding effort that will follow it, the BID is now working to expand its staff as it gears up to start serving the expanded portions of its boundaries on July 1. It is concurrently working to “better understand the needs and priorities of those areas,” Gabriel said.

The area, meanwhile, is in the midst of an HQ2-fueled transformation that will include thousands of new residential units, as well as the retail space along Crystal Drive nearly quadrupling (including the planned addition of an Alamo Drafthouse movie theater).

While some have suggested that Crystal City is transforming from an office canyon to a more desirable live-work-play neighborhood, Gabriel pushed back on that “misconception.” Crystal City already has 15,000 residential units, one of the county’s most-visited parks, a theater, an art gallery, and numerous restaurants and bars, she noted, and that’s not to mention extensive transit and trail connectivity.

Of course, there’s now a lot more on the way, including the under-construction Long Bridge Park aquatics center.

Transportation will be a key priority for the BID going forward, as it works with the county to shape changes to Route 1 and advocates for a new pedestrian connection to Reagan National Airport.

“I think the area has been a hidden gem, with great bones,” said Gabriel. “The big transformation is just in terms of public perception and [Amazon] putting the area on the map.”