(Updated at 2:35 p.m.) On Friday, as Northern Virginia reopens, local gentlemen’s club Crystal City Restaurant will be just what its understated name suggests: a restaurant.

CCR, as the club is known, is planning to open a new, 17’x24′ outdoor seating area recently constructed in its front parking lot. There will be six tables, 24 chairs and no dancers.

The long-time establishment along 23rd Street S., just west of Route 1, reopened for carryout on Friday, May 22, and will now — during Phase 1 of the reopening — serve its reasonably-priced prime rib, as well as beer and wine, to outdoor diners.

Owner Billy Bayne tells ARLnow that he’s eager to “get back in the groove, get my people back, try to get back to work.” CCR, he said, will as always offer “good food, good service, clean facilities.”

Bayne describes the gentlemen’s club as “a neighborhood restaurant, with dancers.” The dancers, however, will have to wait until the Commonwealth moves to a new reopening phase that allows indoor restaurant seating. Still, reopening even in a small way will help alleviate some of the pain of the shutdown.

“Everybody needs to open their doors, or they’re done,” said Bayne.

As for the potential name change to “National Landing Strip,” in honor of the area’s new identity, Bayne said that will also have to wait.

“Right now, I’m worried about survival of my business, about getting my kids through college,” he said. “I’m not worried about a name change.”

In addition to a two month closure, Crystal City Restaurant — and other nearby eateries — will be dealing with the coronavirus fallout for months to come. Crystal City is usually chock full of office workers, hotel guests and conference-goers. Now the offices are largely empty, with employees working from home, and hotels that would usually be 90% full are 20% full. Conferences have been cancelled through the end of the year and Rolling Thunder, which would have rolled into Crystal City this past weekend, was instead held virtually.

Bayne maintains his prediction that some 30% of restaurants will ultimately go out of business due to the pandemic. He said he’s grateful for the support he’s received from customers, even though business is way down.

“Restaurants are in dire straits,” he said. “We appreciate everyone out there who has come out and ordered from the local restaurants and helped us.” 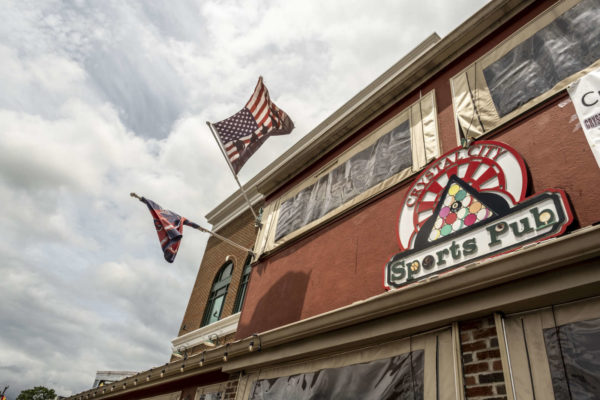 During the spring, the Sports Pub would normally have been packed with nearly 500 paying customers during the NCAA basketball tournament and other high-profile sporting events. Instead, it’s doing only 10-20% of its usual revenue through takeout.

Freddie, Bayne said, helped give the pub a boost when he received a large takeout order from Amazon, for distribution to local first responders and Virginia Hospital Center, and then distributed large chunks of the order to other restaurants along 23rd Street S.

Bezos is “a class act for trying to help Crystal City… and the little local small businesses,” Bayne said, adding the Lutz is likewise to be commended for his generosity toward fellow local businesses.