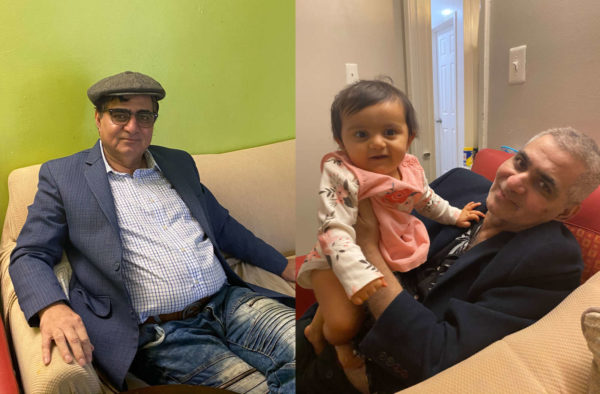 When he was in the midst of a protracted battle with a severe case of COVID-19, Arlington resident and former local restaurateur Mohammed “Jimmy” Khan said he realized he wished his life had more purpose.

Khan — who once owned Toscana Grill and Pines of Florence, among other restaurants — is currently at home in Arlington on the slow road to recovery since being diagnosed with the disease.

“I’ve been home for a month,” Khan said. “I’ve been much better. The day I came home I was so weak I couldn’t turn myself on my side.”

Khan said his first symptom was a fever that kept going up, but it was early in the pandemic and he didn’t suspect at first that it might be COVID-19.

“I was thinking it was just the regular flu, the seasonal flu,” Khan said. “My fever was going up and I did not pay attention. I thought it was just one of those every few years things. I didn’t pay attention that much. For 10 days I didn’t bother to go to the hospital, I just managed myself with Tylenol.”

During the day, Khan said it would seem to get better, but at night it would return.

“I had miscalculated,” Khan said. “When I came to [Virginia Hospital Center] they sent me back home for three days before I went to Fairfax Hospital. There they tested me for coronavirus and it was positive.”

Khan said his memories from the hospital, and from the days just before he tested positive, are hazy.

“I lost my memories,” Khan said. “I don’t even remember coming to the Arlington hospital. I don’t remember how many days I stayed there. Once I went home, when I came back, I’d learned I’d been to Arlington hospital because my family told me.”

By the time he arrived at Inova Fairfax, Khan said his temperature was 110 degrees. Khan was put into an ECMO machine for two weeks, which he credited with saving his life.

His first memory upon waking up was hospital workers trying to help him video conference with his family.

“When I first woke up, we tried to FaceTime my family,” Khan said, “but I had no power to talk or even keep my eyes open.”

Khan said his body is still sore and he has a hard time sitting down or moving around too much, but he’s managed to walk around the block a little further every week or so.

The frightening encounter with the pandemic has left Khan rattled and reevaluating his priorities.

“It’s hard when you see your life,” Khan said. “It makes me think everybody should do good deeds.”

During the hospital stay and in the long struggle to get back to normal afterward, Khan says he’s felt depressed and hopes to do more good with his life.

“I’ll probably have to give my life a little direction,” Khan said. “I’m thinking of doing more volunteering, anything I can do to bring discipline in my life. I used to not take care of myself, not give time to my family.”

Khan said he spent much of his life working in restaurants and he hopes, after the pandemic, to cut work out entirely and spend more of his time with his family. It’s a realization that Khan said he feels thankful for.

“I feel very blessed,” he said.

END_OF_DOCUMENT_TOKEN_TO_BE_REPLACED

More Stories
Video: People Keep Cutting Across I-395 to Get to the HOV BridgeMorning Notes