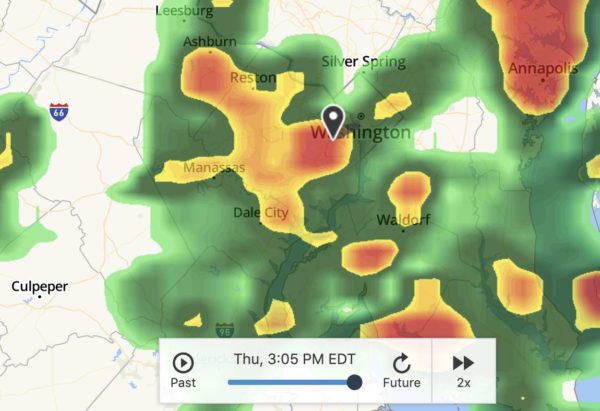 (Updated at 1:35 p.m.) After getting drenched by a storm early this morning, Arlington may be getting another round of heavy rain tonight.

The county and the D.C. region is currently under a Flash Flood Watch. Slow-moving storms are expected to form this afternoon, dumping torrential rainfall on ground already saturated by the morning storm and Isaias earlier this week — a recipe for flooding.

The watch is now in effect until 6 a.m. Friday; it was originally set to expire at midnight but was extended Thursday afternoon.

Through this evening… Numerous slow moving showers and thunderstorms continue to develop across the region and should expand and redevelop with time. Locations which are repetitively affected could receive multiple-inch rainfall totals. This could lead to rapid rises on streams and flash flooding of low lying areas.

PRECAUTIONARY/PREPAREDNESS ACTIONS… A Flash Flood Watch means that conditions may develop that lead to flash flooding. Flash flooding is a very dangerous situation. You should monitor later forecasts and be prepared to take action should Flash Flood Warnings be issued.

The Flash Flood Watch was expanded to now include all of northern/central VA, the WV panhandle, and all of central/southern MD. It was also extended until 6 AM Friday morning. Heavy rain is expected to develop this afternoon into tonight and could lead to flash flooding. pic.twitter.com/t33klZNzLm

Image via The Weather Channel