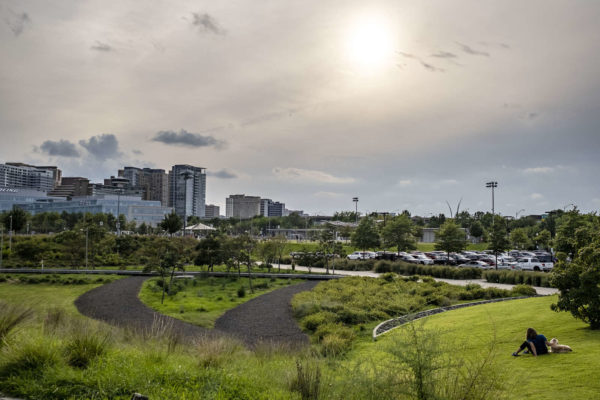 Western Smoke Causing Hazy Skies — “The local National Weather Service office pointed out today in its technical discussion that the smoke is caught in the jet stream and moving overhead around 20,000 to 25,000 feet high. Smoke from the historic fires out West now covers much of the country, and it is expected to continue to be an issue in the days ahead.” [Washington Post, Twitter]

Board Approves Road Project — “Arlington County Board members on Sept. 12 approved a contract worth up to $805,000 for improvements to the intersection of 18th Street North with North Glebe Road and North Wakefield Street, aimed at providing a better walking and biking experience for children and others headed to Glebe Elementary School.” [InsideNova. Arlington County]

Ret. Deputy Seeking Answer to 9/11 Mystery — “Nineteen years after the 9/11 attack at the Pentagon, a retired Arlington Sheriff’s deputy still doesn’t know if the badly injured man he pulled from the burning building survived. He doesn’t know his family or even his name — and Art Castellano still cries about it whenever something reminds him of that day. Now, WUSA9 is trying to help reunite the two men.” [WUSA 9]

Teacher Seeking Desk Donations — “Students across Northern Virginia are turning homes into classrooms, so Arlington art teacher Jeff Wilson decided to rally the community to help. Wilson posted a request online for people to donate their old desks to help students who are learning from home.” [WJLA]

Local Business Legend Dies — “Russell A. Hitt, who helped transform the family business into one of the nation’s largest and most successful general contracting firms, died Sunday at his Falls Church residence. The 85-year-old Arlington native is survived by his wife of 66 years, Joan; four children and 15 grandchildren and six great-grandchildren, many of whom now work at Hitt Contracting Inc.” [Washington Business Journal]

No, the FBI Didn’t Conduct a Raid in Rosslyn — “The FBI’s Washington field office says it did not raid the home of Arlington conspiracy theorist Jack Burkman, despite a Washington Post story that apparently took Burkman’s word that his home had been tossed by federal agents.” [Washingtonian, Daily Beast, Washington Post]

END_OF_DOCUMENT_TOKEN_TO_BE_REPLACED

More Stories
Live Your Best Jewish Life in NoVAMorning Poll: When Do You Want to Return to the Office?