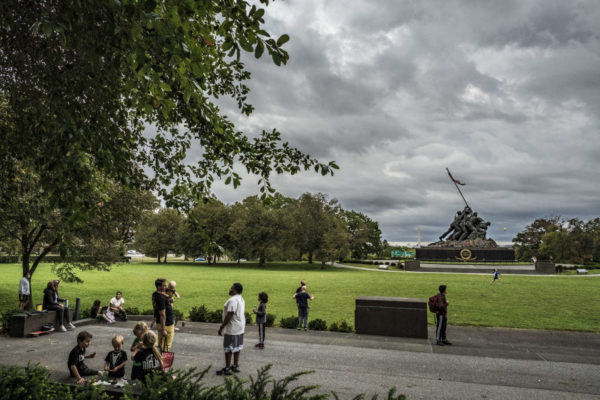 Shooting Near Arlington Border — An early Sunday morning shooting that could be heard in parts of south Arlington “happened along the 3800 block of South George Mason Drive at approximately 1:19 a.m., according to Fairfax County police. Police said when they arrived at the scene, they discovered bullet casings but no victims. Shortly after, Arlington County police stopped a vehicle along I-395 and found a victim who had been shot in the abdomen and was trying to drive to a hospital.” [WTOP]

Purple Lounge Loses Liquor License Again — “The Virginia Alcoholic Beverage Control Authority has temporarily suspended the alcohol licenses of the Purple Ethiopian Restaurant and Lounge, LLC after finding the establishment in violation of the terms imposed… on September 16, 2020. As a result of this action, the alcohol licenses of the Purple Lounge will remain suspended for a minimum of 10 days with reinstatement dependent upon approval by Virginia ABC.” [Arlington County]

Local Tourism Boomed in 2019 — “After a record-breaking 2018, tourism spending in Arlington rose to $3.6 billion in 2019, according to data released today by the Virginia Tourism Corporation. Arlington has led Virginia counties in visitor spending for 12 consecutive years, with local tourism in 2019 generating $97.8 million in local tax receipts… [but] early numbers for 2020 project a sharp decrease in tourism spending.” [Arlington County]

Those Darn Kids Are At It Again — “Certain mountain bikers have blazed new unauthorized trails down the historic hillock known for 300 years as Brandymore Castle. They’ve angered tree stewards and parks protectors who bemoan damage to plant life on that secluded tree-lined formation in Madison Manor Park… The problem, Allen said, is not that mountain biking is inherently bad, but that a few practitioners lack education in the environmental impact of their behavior.” [Falls Church News-Press]

National Landing = Copenhagen on the Potomac? — From a local cycling advocate, regarding the possibility of adding more cycling infrastructure around Crystal City and Pentagon City: “We can turn @NationalLanding into Copenhagen in one fell swoop if we want to.” [@CarFreeHQ2/Twitter]

Today’s a Holiday — As a reminder, ARLnow is on a limited publishing schedule today due to the federal holiday. Arlington County offices and facilities, however, are open. Trash and recycling are being collected, though metered parking is not being enforced.