On Saturday, the Arlington County Board is slated to award a contract to construct a playground in Rosslyn.

Construction on the Rosslyn Highlands Park Playground will begin when construction on the new Queens Court Residences affordable housing development (1801 N. Quinn Street) nears completion, in early 2021, according to the project page. The playground could open near the end of 2021.

The playground and the new Rosslyn Highlands Park are part of a flurry of construction activity in western Rosslyn, including the Queens Court redevelopment, the massive Highlands residential project (which will include a new fire station), and the new H-B Woodlawn school building, known as The Heights.

A concept for the 9,000 square-foot playground at 1615 18th Street N. was approved by the County Board last year. Bids were submitted in October 2020, and county staff recommend awarding the contract to the Donohoe Companies, one of 11 bidders.

The overall budget for this project is $1.56 million. Donahoe bid $1.33 million to build the project, the county is tacking on $133,000 in contingency, and the Queens Court developer — the Arlington Partnership for Affordable Housing — is chipping in $125,000.

“The new playground will include separate play areas with age-appropriate play equipment for pre-school and grade-school age children as well as extensive seating, native planting and bioretention stormwater management planters,” the report said. In addition to standard playground equipment, there will be a prominent climbing tower in the center.

After additional community engagement in 2018, more swings and seating were added to the plan. 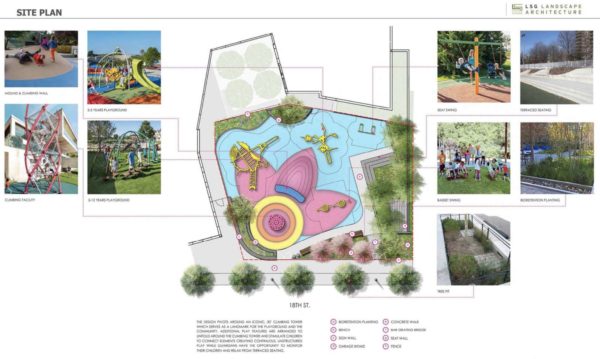 The 9,000-square foot playground will be located within the Queens Court property. The 12-story apartment building, with 249 committed affordable housing units, was approved in February 2017.