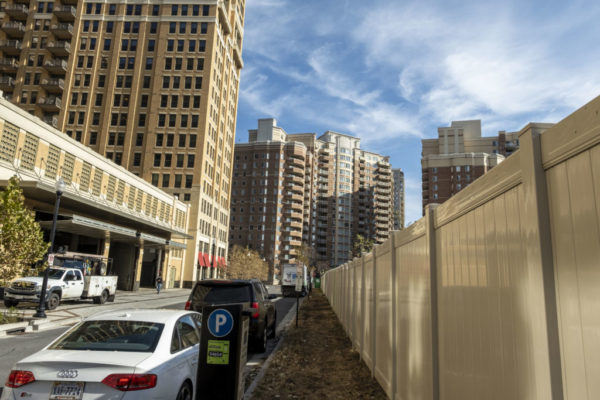 Arlington County is expected to pilot a program that prices parking by demand along Metro corridors.

The proposed $5.4 million program, funded by VDOT, is slated to be considered by the County Board this weekend.

Staff recommend that the Board accepts the state funding and approve the pilot that would alter parking prices based on the day, time and number of people competing for a spot. It would also give drivers real-time information on spot availability and price.

The grant has been approved by the Commonwealth Transportation Board and staff included the project in the 2021 fiscal year capital improvements plan, a county staff report says. The County will not have to match state funds.

In other words, the state is willing to take a chance on the system in Arlington, and should it succeed other communties follow Arlington’s lead.

Demand-based parking, which county staff call “performance parking,” is being piloted in a few cities across the country, including D.C.

The District Department of Transportation said this program, which was tested over the course of four years in Penn Quarter/Chinatown, “was largely successful.” It provided real-time information on spot availability and was able to lower or raise prices, which encouraged turnover and, as a result, increased the number of available spots.

The County Board last reviewed the idea for this system two years ago, when the board gave staff the green light to apply for “SMART SCALE” funding — to the tune of $6.1 million — to pilot the project.

If Arlington was chosen, those funds would not have been available until July 1, 2024. But the reason staff included the project in this year’s capital improvement plan is because the state gave the county a new offer.

“In the fall of 2018, during the application evaluation process for SMART SCALE, the Commonwealth, through one of the Deputy Secretaries of Transportation, approached Arlington County and asked if it would accept funding from [VDOT’s Innovation and Technology Transportation Fund] instead of SMART SCALE,” the county staff report says. “ITTF was designed specifically for cutting-edge projects like Performance Parking that advance the state of the practice in transportation.”

Work on the new system along the Rosslyn-Ballston corridor and Crystal City-Pentagon City corridor is expected to start kick off during the current fiscal year, which ends on June 30.

“A total of $700,000 is anticipated to be used for FY 2021,” the staff report says. “The balance of funding will be used in FY 2022 and FY 2023… These funds will be used for design, installation, testing, and deployment of a pilot hardware and software system.”