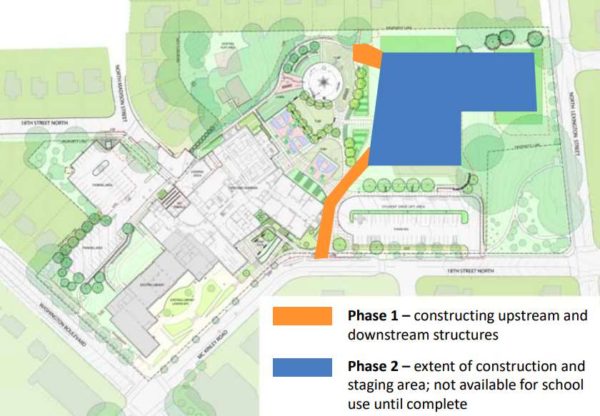 (Updated at 2:30 p.m.) A project that could help the Westover area with its flooding problem is on the Arlington County Board agenda this weekend.

The Board on Saturday is slated to consider an agreement with Arlington Public Schools to build a stormwater detention vault under the athletic fields of the Reed Elementary School site in Westover.

The project is part of the county’s Flood Resilient Arlington stormwater strategy, which was created in response to significant floods that affected the Westover neighborhood in July 2019. The project is not expected to impact the planned opening of the new school, at 1644 N. McKinley Road, in August 2021.

County Board Chair Libby Garvey said that the project maximizes public land for the benefit of the community.

“The Westover Commercial District is a vital component of the economic, cultural and social core of the neighborhood, and it has suffered repeated flooding losses from increasingly volatile storms,” Garvey said in a statement. “This type of investment is part of a larger effort to achieve a Flood Resilient Arlington in a time of climate change.  It will help prevent further devastation and enhance public safety when major rain events occur.”

The school is located in the Torreyson Run watershed, which is one of five Arlington watersheds singled out for improvements.

The project includes designing and building a large underground vault that will “form a cornerstone to a watershed-scale solution in the Torreyson Run watershed,” according to Arlington County.

The work will be broken up into two phases.

“Phase 1 of the project consists of new underground pipe and junction fixtures and is funded by the County and will cost $1.54M,” the county said in a press release. “Phase 2 includes the stormwater detention structure itself and is still under design. Both phase 1 and phase 2 are specifically being designed and scheduled to not impact school opening or operations.”

“The preliminary cost estimate for both phases is between $14.1M – $16.0M for design and construction,” the press release adds. “The length of construction will be determined during the design process.”

Arlington voters approved a $50.4 million stormwater bond last month, which will be used to pay for the second phase.

APS Superintendent Francisco Durán told Arlington County Manager Mark Schwartz in a letter that time is of the essence in approving the agreement to reimburse APS for the project upon completion.

“In order for the work of Phase 1 to be completed in time for the school to open as scheduled, this funding agreement is required promptly,” Durán wrote. “Our APS team, APS consultants and County staff have been working diligently to find the best way to achieve the County’s stormwater storage goals and open the new school on schedule.”

The County is working with APS on a Memorandum of Agreement for the school system’s construction contractor, and plans a public engagement effort with impacted communities about the design of the vault early next year.