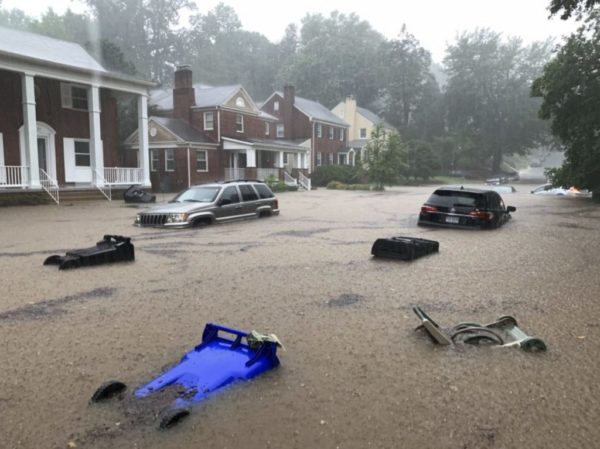 Speakers at an Arlington County Board meeting on the county’s proposed Capital Improvement Plan hammered the plan’s perceived failure to live up to earlier talk of promoting equity.

The main target of most of the ire was the allegation that single-family home owners in North Arlington would receive outsized investment in stormwater protections under the plan, compared to proposed capital spending in the rest of the county.

Rather than the usual 10-year CIP cycle, County Manager Mark Schwartz proposed a one-year CIP focused on pausing and focusing on what the county describes as funding the bare necessities. Given the dramatic storms that wreaked major flooding across Arlington last year, Schwartz recommended a $50.8 million stormwater bond and millions in funding for initial projects.

“This year’s CIP also begins the County’s increased investment in stormwater infrastructure,” the County said in a press release. “The $14.6 million included in the FY 2021 plan will advance several current key projects and lays the foundation of what is expected to be a $189 million investment over 10 years.”

“For the first time, there will be a bond referendum for investments ($50.8 million) in stormwater infrastructure,” the County said. “The County is undertaking a comprehensive review to mitigate flood risks and design work is underway for significant investments in watershed-scale solutions in high-risk areas prone to flooding.” 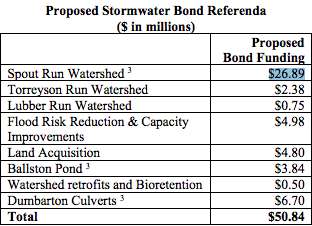 “Making huge investments in affluent, low-density areas seems like a step in the wrong direction and seems perverse, given that single-family home development is the majority contributor to the growth of impermeable surface in Arlington County,” Nichols said. “If we’re going to make large investments in these areas on the idea that flooding is unacceptable anywhere in Arlington, we should make sure the benefits should be accrued to a broad constituency beyond the privileged few that can afford to buy a single-family house in North Arlington. Perhaps a significant upzoning would be in order.”

Nichols and other Arlingtonians have argued for funding to be restored to bicycle and pedestrian improvements cut as part of scaled-back CIP.

The criticism of the stormwater investment contrasts with sentiment in the aftermath of the flooding, which caused significant damage to homes and businesses in parts of the county like Westover.

“After years of study and inaction about what to do about the inadequate stormwater system, board members have been spinning rather than trying to assure residents that the problems will be solved,” the letter said. “The time to wait and sit on your hands is over — it is past time to take action.” 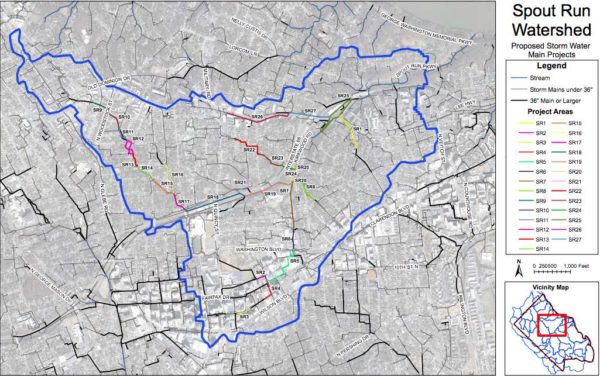 The CIP dedicates $26.89 million of the $50.8 million bond to the Spout Run watershed — an area north of Wilson Blvd. centered around Lee Highway communities. The first major investment in the stormwater plan is $1.2 million towards “relining of a 3,000-foot section of 33-inch Spout Run sewer main, which runs under the North Highlands neighborhood.”

Nichols wasn’t alone. Other speakers, like Darren Buck, contrasted the North Arlington-centered investments with earlier calls for racial equity amid the Black Lives Matter protests in D.C. and in Arlington.

“Many of us white people are looking inward lately thinking about systematic racism,” Buck said. “Arlington’s leaders have made a lot of value statements about how we need to work to dismantle racist systems… There’s not much about improving racial outcomes in this budget memos but a lot about revenue shortfalls. One investment that appears to worsen equity and saddle us with new debt and spending for decades at a time when we have no idea what our future looks like: the proposed stormwater program. [This is] $50 million in debt to start work on $200 million programs almost exclusively for white, wealthy part of North Arlington.”

Buck said the County Board needed to do more to look into who was benefiting from these programs.

“If the Board doesn’t ask critical questions about this stormwater program, we’ll see what you really value,” Buck said.

Several other speakers challenged the Board on questions of equity about stormwater spending and even those in favor of investing in stormwater systems recognized the equity concerns.

“[We] support projects in current abbreviated CIP,” Kathleen McSweeney, representing the Joint Facilities Advisory Commission, said at the meeting. “As the Commission considers facilities, in terms of stormwater — notwithstanding good comments made regarding equity — it is a public safety issue. We do endorse moving forward with this element of the CIP.”

Others were supportive of additions to the CIP, like the implementation of the body-worn camera program for Arlington law enforcement, but said the county’s investments didn’t go far enough. Julius Spain, Sr. called in on behalf of the NAACP to support body cameras, adding that more needed to be done — like implementing citizen review boards, which Police Chief Jay Farr had earlier said would be worth looking into.

“We’re standing by to see what you have to say about citizen review boards,” Spain said. “We appreciate you taking up the body-worn camera… but there’s more we need to do.”

Adoption of the CIP and November bond referendums is scheduled for the Saturday, July 18, County Board meeting with the bonds being voted on in the Nov. 3 election.

Arlington resident Mark Blacknell said the outrage over the divide between the talk of equity and the budget priorities tie into broader concerns about the way the elected County Board works with county staff.

“I know there’s lots of cranks out there — I’m apparently turning into one — but it’s so incredibly frustrating to see the County Board take the word of people like Mark Schwartz who are not serving you well in saying that these are the only choices ahead when they’re not,” Blacknell said.