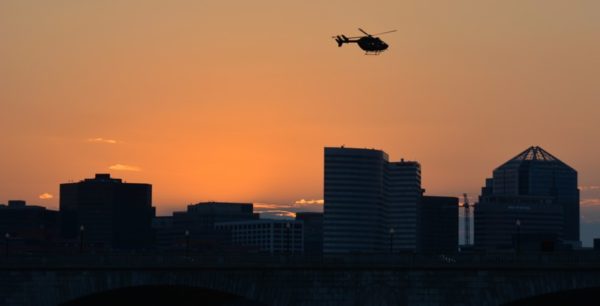 Complaints over helicopter noise in Arlington are likely to soon be better tracked by the federal government.

On Tuesday, the U.S. House of Representatives passed a veto-proof version of the $740 billion National Defense Authorization Act, and it includes a provision directing the Secretary of Defense to “develop a process to receive, track, and analyze complaints of military rotary wing aircraft noise in the National Capital Region that are registered on the noise inquiry websites of Ronald Reagan Washington National Airport and Dulles International Airport.”

Senate Majority Leader Mitch McConnell says that the NDAA will be approved before the end of the year, while questions remain if President Trump will attempt to veto it.

Congressman Don Beyer tweeted that the addition of the language to the NDAA and its passage is a win for the region. Helicopter noise has long been a topic that he’s worked on, and over the summer Beyer wrote in an email to ALXnow that his office consistently receives a high volume of helicopter noise complaints.

“We get calls about airplanes on approach and departure to and from DCA, and increasingly about military helicopters across the region, many of which fly in and out of Fort Belvoir,” Beyer wrote. “I had a town hall on the issue a few years ago in Fairlington, which has been particularly affected, and it was clear that people wanted ways to track and report noise complaints, and to have a forum for ongoing discussion about ways to mitigate that noise which would include input from the local community.”

The NDAA we just passed in the House gives the troops a raise, renames bases formerly named after Confederates, and does a lot more.

There's also a section with a win on something I've been pushing on for my constituents– addressing helicopter noise in the capital region: pic.twitter.com/yNQ4WtqRUz

Beyer recently joined a number of D.C.-area lawmakers in asking for the Defense Department to study helicopter noise in the area.

The noise issue has been a growing concern for years. Last year, the U.S. Army revealed one reason for some extra noise: it was conducting a secret operation that required the use of Blackhawk helicopters.

END_OF_DOCUMENT_TOKEN_TO_BE_REPLACED

More Stories
Prelude to Demolition for Circa 1907 Dominion Hills Mansion?More Restaurants Near Metro Stations Could Get Outdoor Cafés