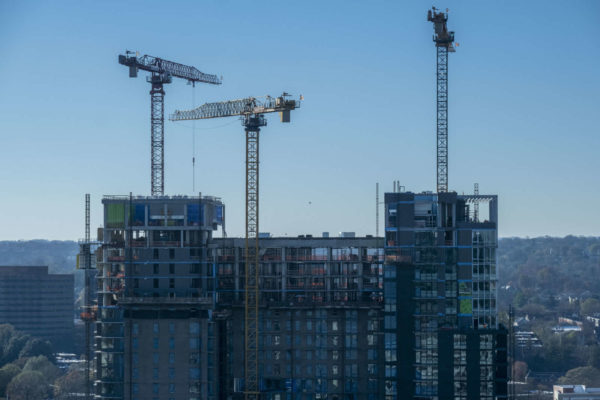 (Updated at 5:15 p.m.) Few office and retail spaces were approved or completed in the first three quarters of 2020, but Arlington officials say it is too early to attribute the drop to the pandemic or consider it a trend at all.

The 2020 third quarter report on retail, office, hotel and residential development appears to show that the rates at which projects are approved, buildings are demolished, and construction starts and ends have dropped off in 2020. Meanwhile, the demolition and redevelopment of single-family detached homes appears to remain consistent.

“It would be easy to think because of COVID-19 that that might explain the tapering off of development, but it’s too early for us to know,” said county planner Emily Garrett, who led the Q3 Development Tracking Report. “It could be normal to have a slower couple of quarters following large projects.” 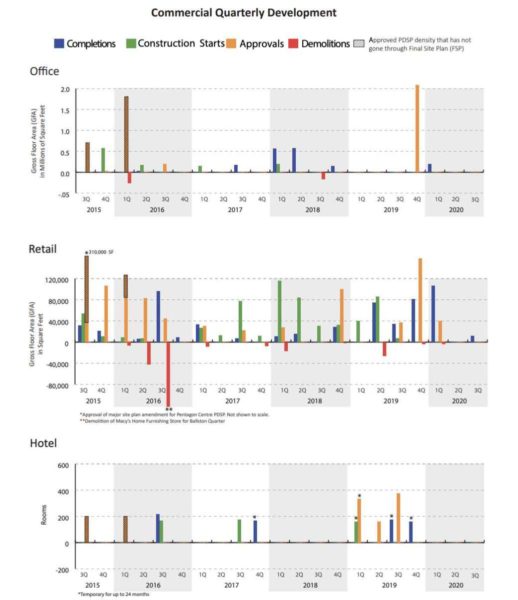 In the view of Marc McCauley, the director of real estate for the Arlington Economic Development office, the coronavirus has impacted existing properties more than future projects.

“If you’re in development and considering mixed-use, we haven’t heard a lot of projects significantly delayed or dropped because of concerns, but you may be concerned about getting a hotel financed,” he said. “It has not moved the needle one way or another in terms of development.” 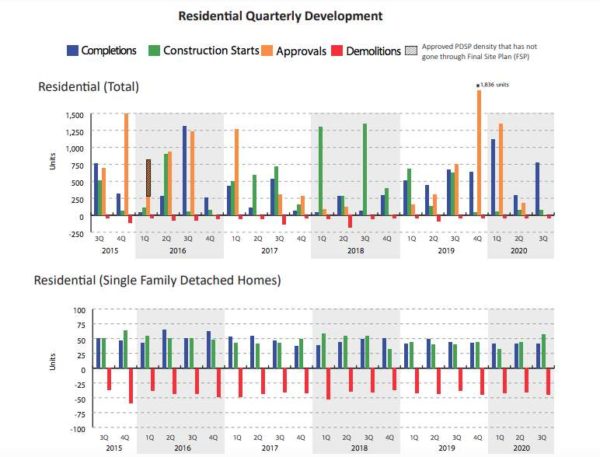 Although these reports look back to the third quarter of 2015, that is not long enough in the scheme of big projects to determine if large-scale office, retail and mixed-use developments are actually slowing down, the two officials agreed.

Rather, such projects could be on four- to five-year cycles, which looks inconsistent compared to the 50 to 60 houses that are approved, demolished and rebuilt each quarter, like clockwork, Garrett said. Before Amazon was granted 2 million square feet in December 2019, the last time a comparable project came around was in the first quarter of 2016, she said.

As for retail, the change reflects the broader trend in Arlington’s development extending beyond the last five years. McCauley said. Retail clusters such as the Ballston Quarter explain the occasional retail spikes, but it is more common to have small amounts of ground-floor retail approved as part of a mixed-use project.

“There’s only so much retail clusters you can support,” he said. “Through long-term market cycles, they get repositioned because it’s about refreshing your concept to be able to compete for customers.”

Meanwhile, the housing development rates reflect the trajectory Arlington has been on for decades, Garrett said, with most new development focusing on denser housing near transit hubs.

“I would definitely say overall the way development trends aligns with the overall demographic trends of Arlington County for decades now,” she said.

The average household size shrank in 1970 and has been stable ever since, with more opting to live in smaller housing units, she said. The report shows that the number of apartment units is growing, while the number of single-family homes remain flat, with detached homes being replaced at a nearly one-to-one rate.

The last three quarters of relative inactivity come as the county is focusing on new and ongoing development plans, including along Lee Highway and in the Clarendon area.

“We’re at that point where we’re looking at studies that have been completed and… seeing where there might be additional potential,” Garrett said.

Garrett said it “could be a year, or years” before the County sees the true impact of the pandemic on development. “We’ll just have to see.”