Some residents in and around Crystal City want to open up the Roaches Run Waterfowl Sanctuary to more walking and hiking — with help from JBG Smith.

The developer owns property around Roaches Run and is interested in converting parts of its private land into a public connection accessible from the surrounding neighborhood.

This partnership is one way that the Arlington Ridge, Aurora Highlands and Crystal City civic associations propose adding open space to their neighborhoods. A second solution is to redesign and upgrade Virginia Highlands Park for more uses than sports.

The two ideas are part of a report published last week from the three associations, which have banded together to form Livability 22202. The report also recommends ways to plan new parks in Crystal City and enhance local biodiversity.

“COVID-19 has changed everyone’s thinking about open spaces,” Livability 22202 President Carol Fuller said. “The traditional parks of the past do not serve the purposes of our new world. We need to have open space, parks and trails for people to go out for casual use outdoors.”

The group is scheduled to present its recommendations to the Parks and Recreation Commission in February, she said.

Compared to other parts of the county, Pentagon City and Crystal City have fewer trails and open parks, Fuller said.

“If we did not have Long Bridge [Park] — which is fairly new — and if we didn’t have Virginia Highlands Park, we would have no trails and very little open space,” she said. (Crystal City is also served by the Mt. Vernon Trail, which connects to the neighborhood near the intersection of Crystal Drive and 18th Street S.)

Livability 22202 is proposing a loop trail and connecting trails into and out of Roaches Run. The County too is interested in turning the area into publicly-accessible natural space as the neighborhood experiences a wave of redevelopment in the wake of Amazon’s HQ2 decision — but officials indicated this spring that it could take 5-10 years to implement.

JBG Smith is willing to make use of its land to advance the broader open space discussion happening in National Landing — the collective term for Crystal City, Pentagon City and Potomac Yard — Andrew VanHorn, Executive Vice President, JBG Smith said in a statement.

“JBG Smith is supportive of plans that would make Roaches Run more accessible to the community and allow more people to enjoy this important natural asset,” he said.

VanHorn added that JBG Smith welcomes “the opportunity to work with the community, the County Board, and the National Park Service to help make this vision a reality.” 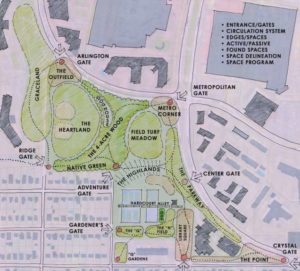 Meanwhile, the report authors envision Virginia Highlands Park as an urban park with a blend of recreational and casual uses.

“One of the problems with Virginia Highlands is it’s primarily for recreation,” such as tennis or softball, she said. “It needs an upgrade badly.”

At 18 acres, it is one of Arlington’s largest parks, but suffers from underused and wasted space, at least according to the authors.

The Aurora Highlands Civic Association has long pushed for changes to the park, and this upcoming fiscal year the County was slated to start developing a master plan for it.

But that plan is now on hold, Fuller said. So, in the meantime, Livability 22202 is proposing upgrades that include a gathering space, a sledding site, better lighting, permanent community gardens and a dog run — similar to the dog park proposed by a separate local group.

“COVID-19 has not only shown us great need for open space, but it also destroyed the budget to give it to us,” Fuller said.

Earlier, the group published another report calling for more diverse housing options in the zip code.